The Parade of Nations and the lighting of the Olympic Flame capped off the opening ceremony in London on Friday night, as tradition dictates.

Following an at-times-surreal pageant directed by Danny Boyle, the athletes who will truly comprise the Summer Games were introduced to the crowd at the Olympic Stadium in London and the billions watching around the globe.

Of course, there were plenty of opportunities to discuss the best- and worst-dressed in the extra-long procession. Perhaps one of the most questionable sartorial decisions was that of the Czech Republic opting for galoshes. 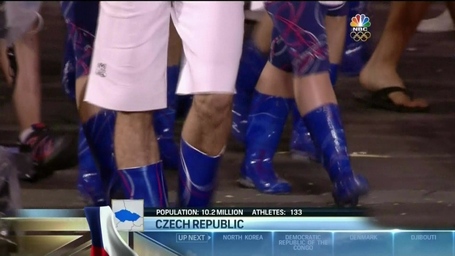 The highlight of the procession was almost certainly the entrance of the independent Olympic athletes. These athletes from South Sudan and Netherlands Antilles entered under the Olympic flag and looked among the happiest to be there. See for yourself:

Following the Parade of Nations and the lighting of the flame, Sir Paul McCartney led the 60,000 fans in attendance in a rousing singalong of "Hey Jude."

For more on the 2012 Olympics, make sure to check out SB Nation's dedicated Olympics hub.