With the prologue of the 2012 Tour de France in the books, Stage 1 proper of the most well-known cycling race in the world will take place on Sunday, as the 198 participants will ride from Liege to Seraing. Fabian Cancellara won the individual time trial in the prologue in Liege and will begin the first stage wearing the yellow jersey for the fifth time in his career.

The circuitous route that starts and ends within the Province of Liege in Belgium will represent a good mix of terrain for the riders, as they will climb to 606 meters on the Baraque de Fraiture near the middle of the 198 km stage before finishing in the streets of Seraing.

Bay Area fans will need to wake up extra-early or watch Stage 1 on their DVR, but Levi Leiheimer will be representing Northern California in the race for Omega Pharma Quick Step. Perhaps he will be able to pick up his second career Tour de France individual stage win on Sunday.

Here is the route from Liege to Seraing that the riders will cover in Stage 1: 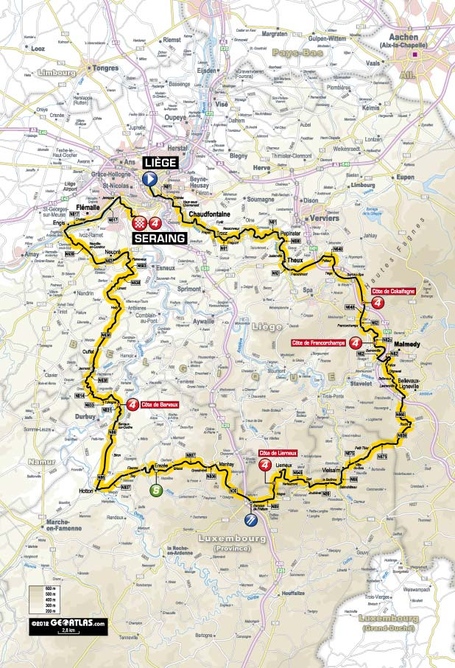 For all news and information regarding the 2012 Tour de France, please stay tuned to this StoryStream. For all things cycling, please visit Podium Cafe.