Santa Rosa based Team BMC lost their grip on the leader's jersey on Tuesday, as Taylor Phinney's injury slowed their efforts in the team time trial. They aren't the only Bay Area link to the 2012 Giro d'Italia, though: The namesake sponsor of Garmin-Barracuda is Barracuda Networks of Campbell, CA. BMC may have falters, But Garmin-Barracuda did about as well as a team could do in stage four. Catch a breakdown of the standings and a stage five preview including start times and television broadcast information below.

The team time trial that was stage four of the 2012 Giro d'Italia laid waste to the general classification standings, leaving some men tumbling and others scrambling to the top. Unlike a mountain stage, in a TTT a GC contender is at the mercy of the weaker members of his team. In the mountains, the burden eventually rests squarely with the team captain; if he can get up that hill faster than his opponents, he'll win. In a TTT, the captain of a less-than-spectacular team can do nothing but watch as the stronger teams run through the course faster than he could hope for. Here are the standings after stage four:

As you can see, Garmin-Barracuda holds the top four positions and six out of the top ten. Ryder Hesejdal is their long-term GC threat, despite Navardauskas holding the jersey at the moment. The prognosis on Taylor Phinney's Giro got a lot darker Tuesday, as his team had to wait for him at multiple points and that delay cost him the Maglia Rosa. Other GC contenders had a mixed day. Italians Michele Scarponi and Damiano Cunego, both of Team Lampre, are now both over a minute back from the leader as Lampre finished the stage in 12th place. Rodriguez may be the man in the best position, as he has neither a massive gap to make up nor the pressure of holding on to the lead.

Stage five looks to be another one for the sprinters, a 209km straight run. A late group of small hills may favor a daring breakaway, but they'll really have to put the hammer down to avoid capture in the flat final 10km of the stage. From the official Giro site: 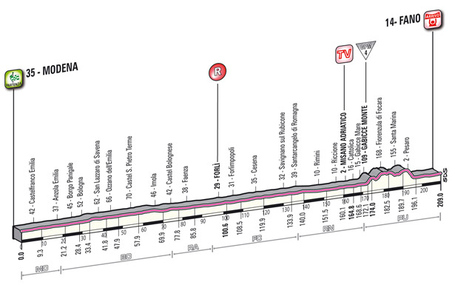 Garmin-Barracuda will be both protecting the Maglia Rosa and attempting to position Tyler Farrar for a stage win, it will be interesting to see how their priorities shake out. Team Sky could have done better in the team time trial, and they'll look to rebound by deploying their prefected leadout as Mark Cavendish pursues his second stage win. Team BMC, free from the responsibility of protecting Phinney, may have Thor Hushovd attempt a stage win, or they may look to see if they can move Italian Marco Pinotti up the GC standings. The stage will either see a wild sprint finish or a daring breakaway, so either way it's unlikely to disappoint. Don't miss it.

SB Nation Bay Area will continue to bring you 2012 Giro d'Italia updates at this storystream, and as always SB Nation's cycling blog Podium Cafe has all the analysis and information you need.