Team BMC's Taylor Phinney hit the pavement hard in stage three, and the sharks will be in the water come stage four. Stage four of the 2012 Giro d'Italia is an almost entirely flat 32.2km team time trial (TTT) in the Italian city of Verona. A team time trial is much like the time trial laid out in our 2012 Giro d'Italia guide, except instead of individual riders it involves individual teams. Each team member will don their aerodynamic helmet, skinsuit and specialized bike, and they make their way through the course as group. If your team is stacked with climbers to help your GC contender get over the mountains, they won't be able to power through a TTT and as a result a contender can lose significant time to his opponents. On the flip side, if your team is built around sprinters and strong all-rounders, the pace you set in a TTT can bring big rewards. 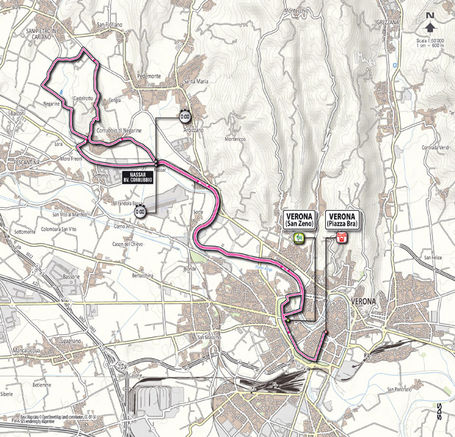 Anything short of a stellar performance could cost Team BMC the Maglia Rosa. Team Sky's Thomas Geraint is nine seconds behind Phinney in the overall classification, he rides with Mark Cavendish, who won last year's TTT with his previous team. Garmin-Barracuda speedster Alex Rasmussen is four seconds behind Geraint, and he's backed by a team including Tour de France top-ten finisher Christian Vande Velde. BMC came prepared though, and have every reason to expect a good result tomorrow. BMC's Marco Pinotti has spent time in the Maglia Rosa himself, and teammates Alessandro Ballan and Thor Hushovd are both former road race world champions. The unique format of the team time trial, though, means teams may be defined as much by their weakest members as by their strongest. However it plays out, expect big things from stage four.

Stay tuned to this storystream for Giro previews, recaps and more. As always, SB Nation's cycling blog Podium Cafehas all the news and analysis from the world of professional cycling.