2012 Giro d'Italia: Some Grand Tour Basics And A Guide To The Giro

Share All sharing options for: 2012 Giro d'Italia: Some Grand Tour Basics And A Guide To The Giro

We at SB Nation Bay Area are bringing you coverage of the 2012 Giro d'Italia, and the race's first rest day brings the perfect opportunity to run through some of the basics of a grand tour for anyone who might just be browsing across our coverage here. If you're not at all familiar with cycling, we've got the info you need.

What's Going On: The Giro d'Italia is one of cycling's three grand tours, stage races that take place annually in the summer. The Tour de France is obviously the biggest of the three, but the Giro and the Vuelta de España are both well respected races. Many of the heavy hitters in cycling skip the Giro to focus on training for the tour, so give Giro riders a bit of extra respect for not being cowards.

How Does It Work: The race plays out in a series of daily races from one city to the next, or sometimes in a circuit looping back to the starting city. Each stage has a winner, and after three weeks and more than 3400km, the person with the lowest cumulative time wins. Riders are not allowed to sneak out of the hotel at night and try to get a head start on the next day's stage, even if they don fake mustaches or pretend not to speak the language.

Fancy Shirt You've Got There: The rider with the lowest total time, also known as the General Classification leader, is awarded the Maglia Rosa (Pink Jersey). Taylor Phinney of Santa Rosa based Team BMC took the Maglia Rosa on day one, winning the opening time trial. 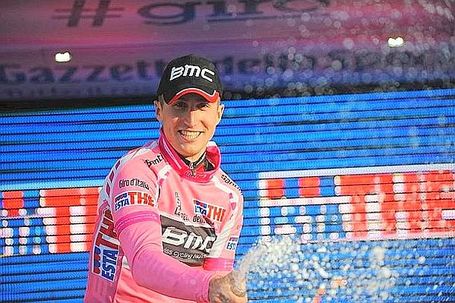 The presentation of the Maglia Rosa also includes two pretty ladies who are paid to give you a kiss on the cheek. You can probably hug them, but don't expect them not to feel weird about it.

There are three other jerseys at stage. As the race progresses, points are awarded to the first rider to the top of each significant climb. The rider with the most points gets the blue Mountains Classification jersey, the Maglia Azzura. The MC jersey has historically been green, but was changed this year to a blue jersey so as to fit in with a sponsor's color scheme. This irritates purists, but given the state of the global economy they're lucky that the Giro isn't asking them to steal shirts from clotheslines as they roll through the countryside. The Points Classification red jersey, the Maglia Rosso Passione, is handed out to the rider who is first to specific points in the race, generally sprints placed in the middle of stages to keep things interesting. Finally, Maglia Blanco, the Youth Competition white jersey goes to the rider with the best overall time under 25 years of age.

When Does Something Cool Happen: Usually about three to five hours after the start of the stage, but the television broadcast isn't in real time so don't worry. Different stages play out in different ways, and the race is set up to favor different riders at different points. There are stages that favor the sprinters, stages that favor the climbers, and time trials. One thing in common to all stages except time trials is the presence of the breakaway. Cyclists travel in the peloton, a large group that allows them to draft off each other and conserve energy for eventual attacks. Almost every day a group of anywhere from two to a dozen cyclists will jump off the front, put in a much bigger effort than the peloton, and end up out ahead of the main bunch. If they can go fast enough, they can outrun the peloton to the line and someone from the breakaway wins the stage. This almost never happens, and instead riders in the breakaway get some time to think about the futility of non-cooperative effort and what life is really about, and then eventually the peloton put things in gear and chases them down. Aside from the breakaway, here's what to expect:

The 2012 race course was designed with an eye on keeping the result up in the air for as long as possible. Things will move around in the standings and the Maglia Rosa will likely move between a few people, but eventually the serious contenders will make their move and attempt to settle the race. It takes a long time to get to the serious mountains, but once it's there teams will only have a couple of shots at taking out their opponents. The second to last stage climbs two brutal mountains, and the final stage is a 31.5km time trial. Before that there are at least five more stages that favor all-out sprint finishes, and there will be plenty of drama around contests for the Maglia Assura and the Maglia Rosso Passione.

Who To Watch: Alberto Contador, last year's winner, had his victory stripped due to a doping scandal. With him gone, there's no clear favorite. Michele Scarponi (Liquigas) is now the official 2011 Giro d'Italia winner, but if he doesn't win this year he will spend the rest of his life assuming people do not actually respect him. (Suffering!) Joaquim Rodríguez (Katusha), Roman Kreuziger (Astana), Ryder Hesjedal (Garmin-Barracuda), Frank Schleck (RadioShack-Nissan) and John Gadret (Ag2r La Mondiale) are other names who have eyes on the Maglia Rosa.

Team BMC, of course, had success on day one and with Taylor Phinney in pink they'll look to keep him there as long as possible. Thor Hushovd, the sprinter who over the past few years has grown into a solid overall rider, will be looking at both stage victories and, if the opportunity presents itself, to target the Maglia Rosa. Phinney would have to lose the jersey first, though, it would be almost unheard of for a teammate wouldn't steal it off the back of another.

And there's your guide to the basics of the 2012 Giro d'Italia! SB Nation Bay Area will continue to keep you updated on any and all suffering, and as always SB Nation's cycling blog Podium Cafe has news, commentary, and analysis on the world of professional cycling.