The first week of the 2012 Giro d'Italia continues with another loop through Denmark, as the peloton will roll out of Horsens, head through Danish farm country, and return to Horsens for a short circuit through town and likely another bunch sprint finish. Map via the official Giro site: 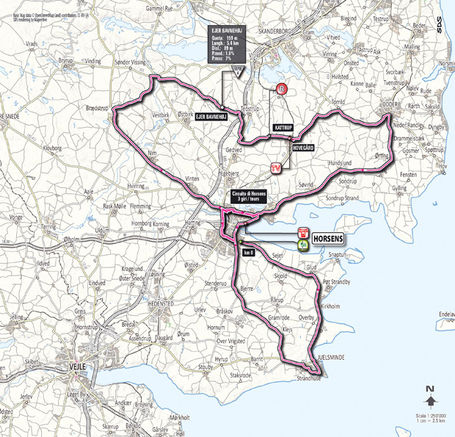 There is a climb in stage three, a meager 159 meters at a 2% average grade, but it has points assigned. The green Mountains Classification jersey goes to the rider who ascends specific climbs the fastest, and anyone with their eyes on that jersey will be jockeying to be first up that tiny Danish hill. Other than that the stage is 190kms of scenic Denmark before a tight circuit through Horsens, featuring a number of quick sharp turns in the final 10km.

As with stage two, a long flat stage favors the sprinters. Expect Team Sky to attempt to set up another Mark Cavendish win, Garmin-Barracuda to do the same for Tyler Farrar, Rabobank to pull Theo Bos to the line, and Team Radioshack-Nissan for Daniele Bennati. Team BMC will likely stick with the conservative plan, attempting to stay towards the front of the peloton to avoid crashes and get Tyler Phinney to the finish line with the main bunch and keep their hold on the pink leader's jersey. That would leave them in front all the way to the end, so we may see another effort like Thor Hushovd's move from stage two.

Stage three is a short, fast stage with an aggressive finish, so a strong move by a breakaway could pay off. If it doesn't, expect the sprinters to fight tooth and nail for the victory. Cavendish looked dominant in stage two, so it'll be interesting to see if anyone steps up to challenge him.