Stage two of the 2012 Giro d'Italia is a long loop through Denmark, a 206km (128mi) flat stage from Herning, out along the western coast, then looping back to Herning what will likely be a sprint finish. Images courtesy of the official Giro d'Italia site: 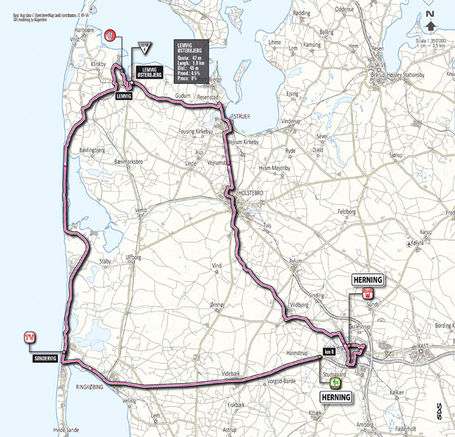 Traveling the coast of Denmark with winds coming off the North Sea could bring back bad memories for a number of teams, as the 2010 Giro saw a similar early stage that featured no small amount of carnage, including American Christian Vande Velde (Team Garmin-Barracuda) breaking his collarbone in one of the many crashes of that day.

Santa Rosa's Team BMC will look to avoid any trouble from those north winds as they try to deliver Thor Hushvold to the line. Hushvold has said that his goals include stage wins, and many are excited to see another chapter in his rivalry with Mark Cavendish (Sky Procycling) play out.

The first five stages of the race are all relatively flat, and are likely to play out in similar ways. The peloton will depart, and at some point a breakaway will form as teams try to make a statement, whether that statement is "Don't underestimate us" or "We need to get our sponsor some TV time." The peloton will likely chase the break down in the later portion of the race, swallowing them back into the pack and leading to a bunch sprint for the finish. Teams form single-file lead-out trains, keeping their sprinter safe in the draft, before the sprinters themselves settle the issue over the final meters. The breakaway always has a chance, especially if the peloton suffers in the wind, so expect action either way in stage two.

For BMC, delivering someone to the line isn't the only job. Young rider Tyler Phinney won the stage one time trial, and if the team can keep him in the Maglia Rosa leader's jersey they will make every effort to do so. If someone close to Phinney in the overall standings joins the breakway, for example, it becomes BMC's job to do much of the work in chasing the breakaway down. The team is posting photos from the race online, so check those out if you're interested.

For Giro updates and news about Bay Area based BMC, stick with this storystream. For all your cycling news and information needs, check out SB Nation's cycling blog Podium Cafe.