Stage 21 of the 2012 Giro d'Italia is a 30km time trial through Milan. Less than two minutes separate the top three men in the general classification. Joaquim Rodriguez (Katusha) rode well through the mountains, having enough in his legs to maintain his hold on the Maglia Rosa. Ryder Hesjedal (Garmin-Barracuda) surprised many with how strong his climbing was, and he sits 31 seconds out of the lead. 2011 Giro champion Michele Scarponi (Lampre-ISD) attacked valiently through the hills, but he struggled to put any time into Rodriguez. He sits in third, 1:51 out of the lead. 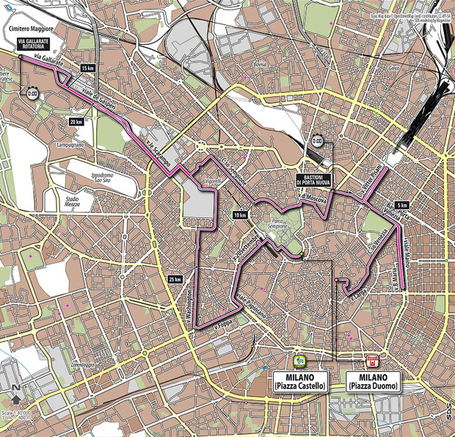 Of the three men, Hesjedal is the best time trial rider. He finished stage one's 8.7km time trial 14 seconds ahead of Rodriguez and 37 seconds ahead of Scarponi. The final time trial is more than three times as long; extrapolating those gaps gives Hesjedal enough of a lead to take the overall victory. Rodriguez has seen big wins slip away before. He'll need the ride of his life to keep it from happening again.

Hesjedal and Rodriguez's time only matters relative to each other, leaving the door open for better time trial riders to take the stage. That's an opportunity for the man who won the first time trial, Team BMC Racing's Taylor Phinney. The Santa Rosa based Team BMC hasn't made much noise since the early part of the race, and they lost a key team member when Thor Hushovd abandoned the race. Taylor Phinney crashed early on and sustained an ankle injury, but he's managed to make it through the entire tour. He's at the very bottom of the standings, but a victory on the final day would go a long way in making his Giro a success.

Television Coverage: Universal Sports beginning at 9:30am EDT (6:30am PDT)

Stay tuned to this storystream for updates, results and more from the 2012 Giro d'Italia. As always, SB Nation's cycling blog Podium Cafe has you covered for full time cycling news and analysis.