Stage 20 of the 2012 Giro d'Italia is the final stage in the mountains, but the race organizers saved the biggest climbs for the finish. The stage starts in Caldes/Val di Sole, and nearly 219km later the riders will confront Passo Dello Stelvio, 1500m of climbing over 22km. 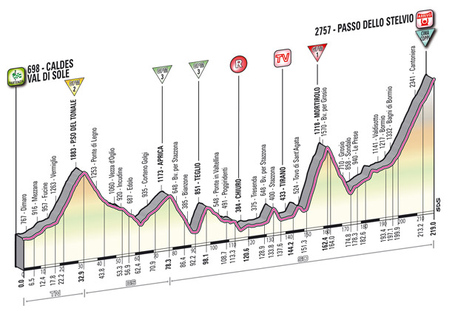 The Stelvio is the Cima Coppi, the highest point the riders will reach during the race. It's a legendary mountain in Italian cycling, the site of daring Giro victories and crushing defeats. What's more, in this year's course it comes very soon after the Mortirolo, itself 1200m of climbing over 11km. Garmin's Ryder Hesjedal has maneuvered himself into a strong position, in second place but close enough to take first in Sunday's time trial. Current leader Joaquim Rodriguez has looked strong on the climbs, but he needs more distance between himself and Hesjedal if he's going to survive the time trial. Roman Kreuziger (Astana), Michele Scarponi (Lampre), and Ivan Basso (Liquigas) have all faltered on earlier climbs. Hesjedal holds the advantage of being the best time trialist in the bunch, for all of the rest of them, Saturday's climbs are the last opportunity to take control of the race. If they reach the close of Saturday's stage with anything left in them, they will have no reason not to leave it all on the slopes of the Stelvio.

Santa Rosa's Team BMC hasn't made much of an impact lately, even with their climber Johann Tschopp finishing in the top 20 of Friday's stage. If they're aching for time in the spotlight, you may see them spend some time in the breakaway or attacking on the slopes.

Stick with this storystream for updates, results and more from the 2012 Giro d'Italia. As always, SB Nation's cycling blog Podium Cafe has you covered for full time cycling news and analysis.