Stage 19 of the 2012 Giro d'Italia is the first of two straight high mountain stages, and it is very likely to see race-deciding action. 198km from Treviso to Alpe di Pampeago, the stage has five ranked climbs in total: a single category three to start, then three category ones and a category two. It's a monster of a stage, and the GC favorite who feels like he's got the legs for it will be looking to leave his rivals behind. 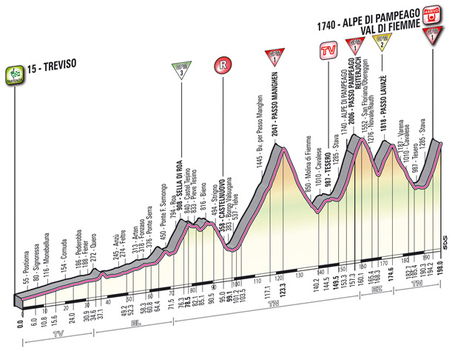 Joaquim Rodriguez (Katusha) currently holds the Maglia Rosa leader's jersey; he and Dominico Pozzovivo (Colnago) are both excellent climbers. Garmin's Ryder Hesjedal had the Maglia Rosa before Rodriguez took it back, he isn't the strongest climber but he is an excellent time trialist. If he can limit his losses in the hills, he stands a good chance at taking the victory in the final stage's time trial. Michele Scarponi (Lampre) has something to prove: technically the defending champion, he got the 2011 victory after Alberto Contador was stripped of his win following a doping scandal. Ivan Basso (Liquigas) is considered by many to win the race. He's not as strong of a climber as Pozzovivo and Rodriguez, but he's no slouch and the Italian always has designs on winning the Giro. Whoever wants this race is going to have to take it, and there's no better seize control of a bicycle race than on the side of a mountain.

Stick with this storystream for previews, results, recaps and more from the 2012 Giro d'Italia. SB Nation's cycling blog Podium Cafe has you covered for full-time cycling news and analysis.