Stage 18 of the 2012 Giro d'Italia is the last flat stage remaining in the race, 149km from San Vito di Cadore to Vedelago stuck between two high mountain days and coming just a few days before the final time trial. It's a stage that looks to favor the sprinters, but placed this late in the race means that a lot of things can happen. 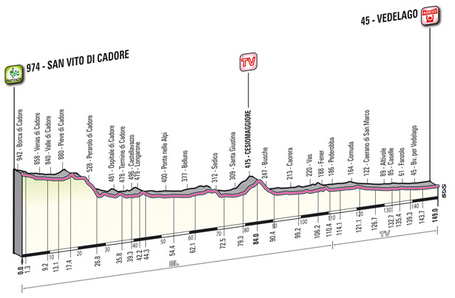 18 stages into a 21 stage race, teams are tired. After a day in the Dolomites, they're even more tired. On a day before two more days in the high mountains, they're about to get even more tired. Any sprinter who shares a team with a GC contender might have a hard time convincing his teammates to chase down the breakaway on Thursday. Teams that don't have a GC contender are likely to be extra interested in joining that breakaway, as their opportunities to make a mark on the race (or get their sponsor on television) are drawing to a close. Santa Rosa's Team BMC hasn't made much of an impact since Taylor Phinney won the opening time trial, it wouldn't be surprising to see them make an effort in the breakaway.

Stay tuned to this storystream for results, previews and more from the 2012 Giro d'Italia. As always, Podium Cafehas all the cycling news and insight you need.