2012 Giro d'Italia Stage 17: Preview Of The Mountains In Stage 17, Television Coverage, How To Watch Online And More

Share All sharing options for: 2012 Giro d'Italia Stage 17: Preview Of The Mountains In Stage 17, Television Coverage, How To Watch Online And More

Stage 17 of the 2012 Giro d'Italia sees the race arrive in the Dolomites, a mountain range in Northern Italy. It is a monster of a stage, 186 kilometers from Falzes/Pfalzen to Cortina d'Ampezzo, going over four catagorized climbs, two category two climbs and two category one climbs. (Climbs are ranked with the lower numbers going to harder climbs, from 5 down to hors catégorie, or 'beyond classification.') 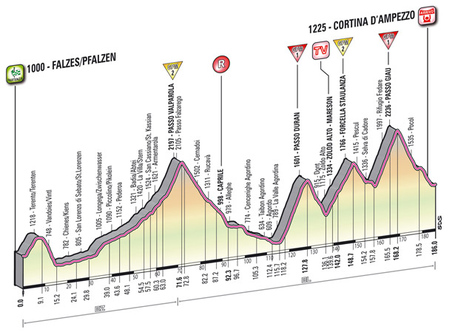 There are only five stages remaining in the race; three of them are high mountain stages. Joaquim Rodriguez (Katusha) has shown he has the legs for climbing and the fight to hold on to his lead, but many of the other players haven't yet made their move. Defending champion Michele Scarponi (Lampre) and Ivan Basso (Liquigas), perhaps the most successful Italian cyclist currently riding, are two of those men who have saved their efforts for the mountain passes. Basso sits in third place, 1:22 behind Rodriguez, and Scarponi isn't far behind, 1:36 out of the lead and in sixth place. They're both well within striking distance, and Ryder Hesjedal (Garmin-Barracuda) sits in second with fresh memories of the Maglia Rosa leader's jersey. Santa Rosa based Team BMC Racing has a pair of riders in the top 20, an aggressive move from either could see them make big gains in the standings. Race organizers loaded the back end of the race with mountains with just this scenario in mind, and as the race heads into the alps they're likely to get the fight for which they'd hoped.

Stick with this storystream for previews, updates and more from the 2012 Giro d'Italia. As always, Podium Cafe is your source for cycling news and analysis.