Tour of California, Stage 7 2012: Preview of Mt. Baldy, Television Information, How To Watch Online And More

Share All sharing options for: Tour of California, Stage 7 2012: Preview of Mt. Baldy, Television Information, How To Watch Online And More

Stage seven of the 2012 Amgen Tour of California is a run from the Southern California town of Ontario to the top of Mt. Baldy, and it is where the race will ultimately be decided. 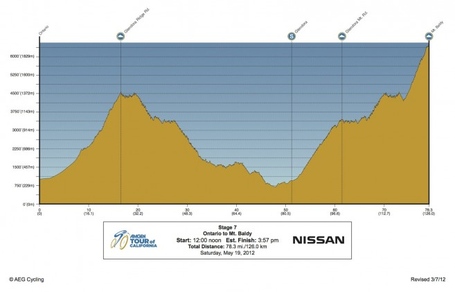 It is a repeat of the 2011 stage that saw Team Radioshack shred the field and deliver Chris Horner to the yellow leader's jersey. This year Horner is over 2 minutes back and it's unlikely that he can put that much time into his GC rivals. Dave Zabriskie is in the lead this year, but he's not the strongest climber and he'll have a tremendous challenge in holding off the attacks. Santa Rosa's Team BMC is likely to be driving those attacks, as their man Tejay Van Garderen sits 34 seconds off the lead, in second place. BMC won't be the only team gunning for the win, also in the top ten is Rabobank's Robert Gesink and UnitedHealthcare's Rory Sutherland.

Stage eight is a run into Los Angeles that functions as race promotion and a treat for spectators. It's in the climb up Mt. Baldy in stage seven that the race will be decided.

Stay tuned to this storystream for updates, previews, and more from the 2012 Amgen Tour of California. As always, Podium Cafe has you covered for cycling news and analysis.