Stage 14 of the 2012 Giro d'Italia is the point at which the race finally arrives in the alps, a 206 kilometer stage featuring two category one climbs and a hilltop finish. This is the point at which any GC contender who has spent the race counting his bullets will finally begin to unload. The riders first go over the Col de Joux, a 22km monster, and shortly after that they confront a 27km climb into the town of Cervina. The final climb isn't as steep, but coming so quickly after the Col de Joux there won't be a happy set of legs in the peloton. 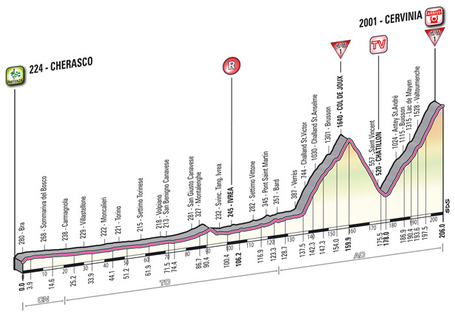 
Of the remaining eight stages, six are medium or high mountains. Race leader Joaquim Rodriguez (Katusha) is a very strong climber, but has never been able to hold on to the lead in a grand tour. That's no secret to Ryder Hesjedal (Garmin), Roman Kreuziger (Astana), or Ivan Basso (Liquigas), all strong riders who are less than a minute behind Rodriguez in the standings. Domenico Pozzovivo (Colnago) is a strong climber with one stage win already, in 14th place at 1:14 back, he's well positioned to make a move. Santa Rosa's Team BMC has a strong climber in the thick of things: Ivan Santaromita currently sits in fifth place, 49 seconds out. This is a crucial stage. If you can gain time here you put your opponents on the defensive, and if you can drive the race fast enough to crack one of your opponents, that's one fewer cyclist you have to worry about in the further mountain stages. There are plenty of mountains still to come, but an aggressive rider who makes the right moves could win the Giro before the day is out.

Television Coverage: Live coverage on Universal Sports beginning at 9:30am EDT (6:30am PDT)

Stay tuned to this storystream for results, previews, updates and more from the 2012 Giro d'Italia. As always, Podium Cafe has you covered for all your cycling news and analysis needs.