Bay to Breakers kicks off this Sunday at 7:00am, starting at Beale and Howard and ending 12 kilometers later on the Great Highway. This will be the second consecutive year the race has begun at 7:00am, after years of starting at 8:00am. The race is organized by "corrals" that provide a wave starting system.

Here is a breakdown of where each corral will be based: 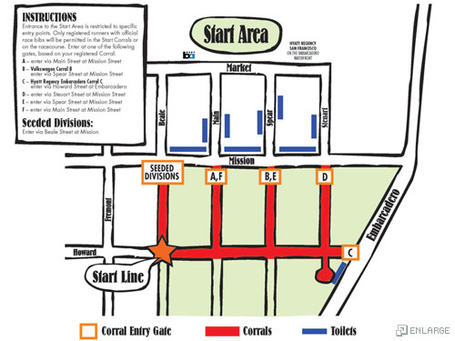 The race begins at sea level at the Embarcadero. The first real challenge is avoiding the mass of humanity surrounding everybody as they make their way up Howard Street. After crossing Market Street, the course rises steeply along the Hayes Street Hill. According to the B2B website, "[a]round the 2.5-mile mark runners climb an 11.15% grade between Fillmore Street and Steiner Street. The remainder of the course gradually flows downhill alongside the Panhandle through Golden Park to the Finish Line at the Great Highway."

Here is a breakdown of the route. You can view a larger image of the map at the B2B website.