Stage 13 of the 2012 Giro d'Italia is 121km from Savona to Cervere without much in the way of climbing, a stage for sprinter teams to take their best shot at delivering their man to the line. That will be the plan, but as we've seen twice in this year's Giro, sharp turns in the final kilometers have a way of throwing teams for a loop. Those sharp turns have been behind Mark Cavendish falling short of his goals, so it wouldn't be a surprise to see him to put in an extra effort towards winning this stage. 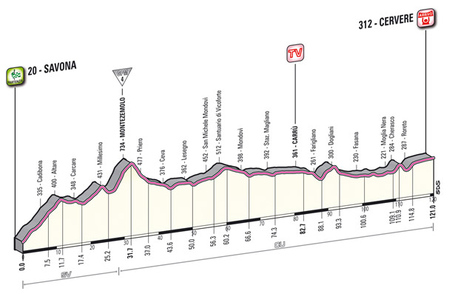 Every sprint stage essentially coming down to "probably Cavendish, maybe somebody else if something goes wrong" might sound boring, but watching Cav's physical dominance and the desperation of teams trying to beat him really is something. Here's hoping nothing goes wrong in the closing stretch, and stage 13 closes with a fair fight.

Stick with this storystream for previews, recaps, standings updates and more from the 2012 Giro d'Italia. As always, SB Nation's cycling blog Podium Cafe has all your quality insight and analysis.