Stage 12 of the 2012 Giro d'Italia is another medium mountain stage, and a preview of the course shows 157 rolling kilometers from Seravezza to Sestri Levante. It's the kind of stage that a daring breakaway can easily take advantage of, if they can catch the main field napping. 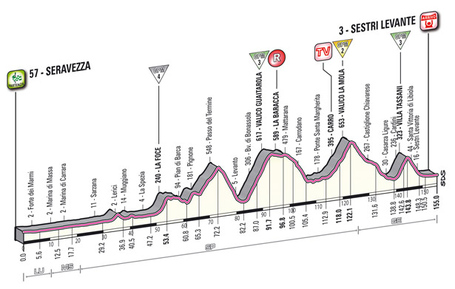 It's unlikely to see much in the way of GC action, but there are plenty of Maglia Azzurra points at stake, so anyone with the Mountains Classification jersey as their goal may try to take advantage of the stage. After the race makes it over Villa Tassani it's a tricky, technical descent that leads right into the finish, so if a break can make it over that last hill with enough of a lead on the peloton, they'll be difficult to chase down. That was the case the last time the Giro was in these parts, in the 2006 Giro where climber Joan Horrach made away with the stage.

SB Nation Bay Area will continue to bring you previews, recaps and more from the 2012 Giro d'Italia. As always, Podium Cafe is your source for quality insight and analysis.