Share All sharing options for: 2012 Tour of California, Stage 4: Preview Of Stage Shows Chance For Upset, Will Test Peter Sagan Over Repeated Climbs

Stage four of the 2012 Amgen Tour of California goes from Sonora to Clovis, 130 miles that just might turn out to be the most difficult of the entire race. The route has climb after descent after climb after descent, but to describe it as "rolling" wouldn't do it justice. Race leader Peter Sagan has put on an inspired performance thus far, but this kind of stage is what truly measures a young rider. 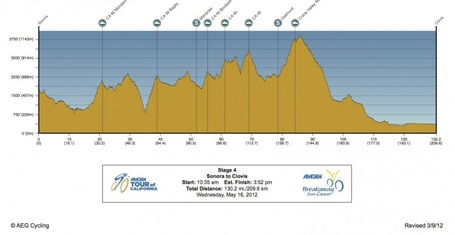 A rough estimate from the profile has the riders doing over 5000 feet of climbing, and this comes the day before the individual time trial. That gives the breakaway a great chance at taking the stage, as a team with a serious GC contender is going to think twice about burning up their legs the day before biggest test of the riders indpendent skill. That said, there's a long descent and a flat finish, so any breakaway that wants to stay away is going to have to put in a stellar effort to avoid being caught. Santa Rosa based Bissel Pro Cycling has seen Jeremy Vennell in more than one break; does he have another in him? There are six climbs with King of the Mountain points attached, so anyone with their eye on the polka dot jersey could really help themselves out on stage four. However it plays out, a bike race traveling over a profile as pretty as that one won't be boring.

The GC Standings after stage three:

A host of others sit 30 seconds out, including the main GC contenders. With things that close, any stage with this many hills could see some big changes.

SB Nation Bay Area will continue to bring you previews, updates and more from the 2012 Amgen Tour of Caliofornia. As always, SB Nation's cycling blog Podium Cafe is your source for news and analysis.