Stage nine of the 2012 Giro d'Italia is listed as a flat stage, but a preview of the profile shows a lot of little climbs scattered along the route, including one just before the finish: 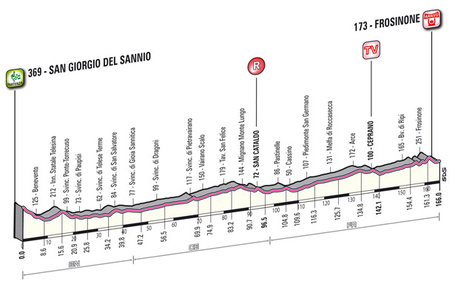 A disciplined peloton will be able to reel in any breakaway, but an aggressive rider who jumps off the front at just the right time might be able to sew a bit of confusion and make away with the stage win. If that doesn't happen, we'll likely see the kind of bunch sprint we saw in the opening stages. Team Sky and Mark Cavendish would undoubtedly be the favorites, but you can't count out Matthew Goss and OricaGreenedge Cycling. After having to stay completely on top of things in the hills, the GC riders can look forward to a day at a bit of an easier pace.

SB Nation Bay Area has you covered for previews, recaps and more throughout the 2012 Giro d'Italia. As always, SB Nation's cycling blog Podium Cafe is your source for quality insight and analysis.