Giro d'Italia 2012 Stage 8: Stage 8 Preview, TV And How To Watch Online And More

Share All sharing options for: Giro d'Italia 2012 Stage 8: Stage 8 Preview, TV And How To Watch Online And More

The organizers of the 2012 Giro d'Italia put together a spectacular stage for the second Sunday of the race, just the kind of thing a fan can sink their teeth into on a Sunday afternoon or early morning, for West Coast fans.) Stating in Sulmona, the race heads southeast, passing over all manner of bumps and little hills (including one short but steep category one climb) before ending in the resort town of Lago Laceno. The cyclists won't be on a holiday, however: it's a bruising 9km category two climb to the finish. 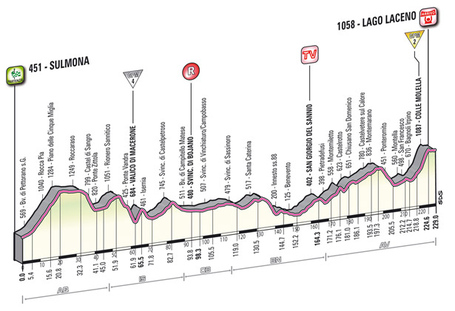 Expect the stage to develop much like stage seven did. A breakway is guaranteed to head out and make a determined effort, and determined peloton is nearly guaranteed to chase them down. The GC contenders know that being caught napping on a stage like this can cost a rider a ton of time, so they keep their eyes open and when a serious contender makes a move the rest are right there to mark him.

Having lost Thor Hushovd, Santa Rosa's Team BMC has focused on the overall standings. Their man Marco Pinotti stands in 11th place, 46 seconds behind the winner. The Italian knows how these races develop, though, and is confident he can make a move. "I know the last week will be a decisive one," he said, "because then it will be a matter of minutes and not seconds."

Stay with this storystream for Giro updates, previews and recaps. SB Nation's cycling blog Podium Cafe is your source for quality cycling news and commentary.