Giro d'Italia 2012 Stage 6 Preview: The Hills of Stage 6, Television Coverage, How To Watch Online And More

Share All sharing options for: Giro d'Italia 2012 Stage 6 Preview: The Hills of Stage 6, Television Coverage, How To Watch Online And More

Stage six of the 2012 Giro d'Italia brings the race to some respectable hills, marking the first serious climbs of the race. They're placed towards the back end of the middle of the stage, meaning any sprinter looking for a stage win is going to have to put a lot of effort into going over those hills. The results from stage four and stage five shook up the GC standings, and stage six could see more of the same. The profile, courtesy of the official Giro site: 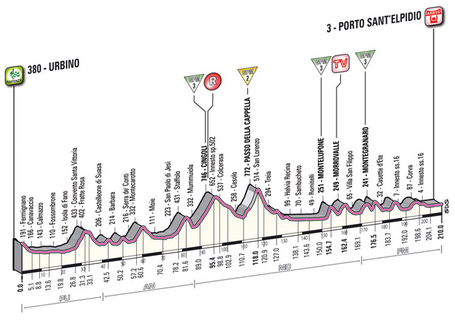 That's a category three climb followed immediately by a category two in the middle, with two category three climbs towards the end to test anyone who makes it over the first two. The penultimate hill The Montelupone, has pitches of up to 15%, and the final climb, Montegranardo, hits 18%. A lot can happen on a stage like this. With all of those hills, a daring breakaway willing to put in the effort can catch a slow peloton and take the win. Team Liquigas is well built to take advantage, and their captain, Italian Ivan Basso, is currently :47 back in the general classification and may need to make a move sooner rather than later. Katusha's Joaquin Rodriguez is sitting comfortably in ninth place, but if he sees the right opening he won't hesitate. Santa Rosa's Team BMC has had a rough few days after a very strong start, they may see stage six as a now-or-never bid to get back into things. Garmin-Barracuda is in control of the race and has both Ryder Hesjedal and Christian Vandevelde as candidates for a run at the Maglia Rosa, despite Garmin's Ramunas Navardaukas currently holding the pink leader's jersey. They'll need to fight off all comers if they want to maintain their grip.

Television Coverage: NBC Universal (National) beginning at 9:30am EST, 6:30am Pacific. They are streaming online, but not for free.

Stay tuned to SB Nation Bay Area's storystream for updates, recaps, and more, and as always SB Nation's cycling blog Podium Cafe has all the analysis you need.