The Masters 2012: Detailed Infographic Of 75 Years Of Changes Augusta National

Share All sharing options for: The Masters 2012: Detailed Infographic Of 75 Years Of Changes Augusta National

Since the Masters begun back in 1934, a lot has changed in the game of golf. Persimmon drivers, one-irons, liquid-filled core golf balls; all of these were standard practice for most pro golfers, though all of that is long gone now. With golf technology ramping up over the past two decades or so, equipment makes drastic changes every couple of years now. Such is the case for golf courses as well, and Augusta National certainly is no different.

Over at Fast Company magazine's design site, fastcodesign.com they highlight Bill Younker's inforgraph of just how much Augusta has changed since it's creation, noting each and every renovation they've made over the years.

Below is a look of the first two holes of Amen Corner, No. 11 White Dogwood and No. 12 Golden Bell. The picture on the left is of the course in 1934, while the one on the right is of a picture of the hole today. On these holes, as well as almost every hole, the greens got significantly smaller, while they expanded the water wherever possible. 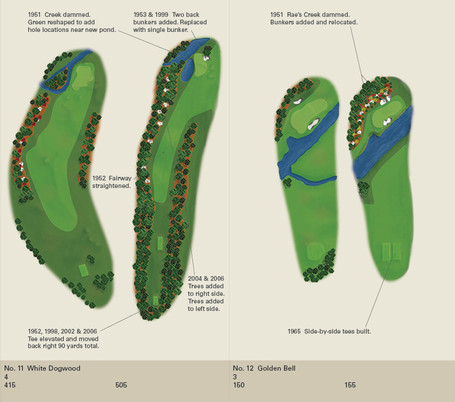 Augusta has had over 100 changes since it's creation, including the addition of multiple bunkers on multiple holes, now having only one without a trap, No. 17 Nandia, not to mention hundreds of yards of additional length. They switched grasses in the 80's, and tried to 'Tiger-proof' the course after he dismantled it in 1997. For a golf course it certainly keeps up with the times.

Peruse the entire inforgraph for yourself.

Bubba Watson Is The 2012 Masters Champion