Jeremy Lin And Kim Kardashian Incompatible, According To Knicks Superstar

Share All sharing options for: Jeremy Lin And Kim Kardashian Incompatible, According To Knicks Superstar

There was some strange rumor created by various sources (possibly named Kim Kardashian) that had Jeremy Lin of the New York Knicks being pursued by Kim Kardashian. That rumor was later denied, and everyone everywhere breathed a huge sigh of relief.

It seems Lin wants to put an end to any such hopes of a Lin-Kardashian pairing happening and dashing the hearts of no one. Find out why after the jump!

This photo seems to emphasize that Lin isn't terribly interested in meeting Kim or being her next boyfriend of choice. 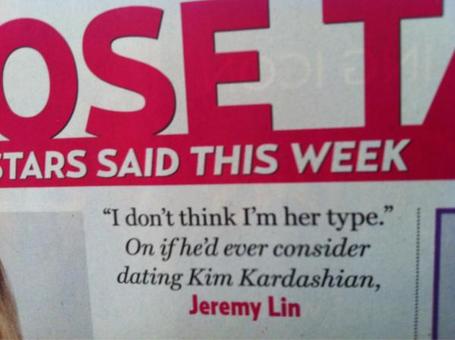 Interesting. Kim's last two most prominent dates have come with two professional athletes, both of whom come from different sports and interesting backgrounds.

Perhaps Lin didn't want to be the one to follow up Kris Humphries. The tough Nets forward plays him a lot, he could come after him on the court with a vengeance!

To discuss Linsanity with Knicks fans, go to Posting and Toasting.