As you're probably well aware of, the President of the United States has a fondness for filling out his NCAA Tournament bracket. He's spent a few minutes every year he's been in his office filling out the Presidential Bracket

Apparently, President Obama made one slight error in configuring his bracket.

Check out what the issue might be after the jump. 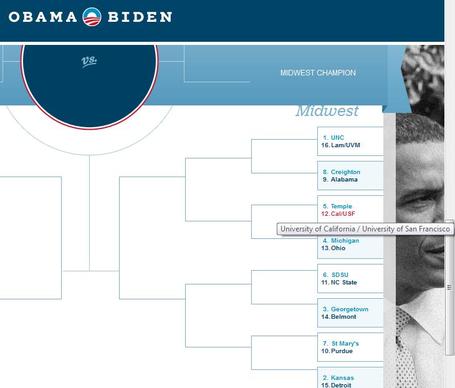 I'm guessing the president got this idea that USF stood for San Francisco for two reasons. The first is that USF is technically what most people call the University of San Francisco. The second is that Bill Russell put USF on the map, and South Florida is only known these days for very exhausting 40-50 point basketball games that are defensively-friendly and offensively-challenged.

Oh well, one can only dream of an all-Bay Area matchup in Dayton. I'd imagine Cal would have loved to play San Francisco, considering they are a much easier matchup for the Bears to deal with in Dayton.

To talk about South Florida basketball, hit up Voodoo Five.