So, this is something that actually happened. We'll get to what it is that did, in fact happen shortly, but first, we'll check to see if you're aware of somethings. You are aware that George Lucas is pretty much awesome, as the creator of Star Wars, right? You're also aware that he was born in Modesto, CA and has plenty of Bay Area ties, yeah? Alright - so you know all of those things. How about the fact that his daughter is a mixed martial artist training in and fighting out of San Francisco?

Perhaps you missed that bit. Yes, Amanda Lucas has competed in five MMA bouts, and though they're with minor organizations, she's finding her niche after losing her first professional fight by knockout. This past weekend, she bested Yumiko Hotta with a key lock in the third round of their fight at DEEP 57. Even sweeter than the win is the fact that it was for the DEEP Women's Open Weight Championship. She's very happy, and very proud, but there's much more to it than that.

She was joined by Darth Vader and Stormtroopers in celebration following the fight. Despite the fact that he winnings are likely a couple thousand and the shindig probably cost quite a bit more than that, it's pretty entertaining. Make the jump for a photo, and for the full fight, head on over to Bloody Elbow.

Photo from Taro Irei of Sherdog.com, via Bloody Elbow. 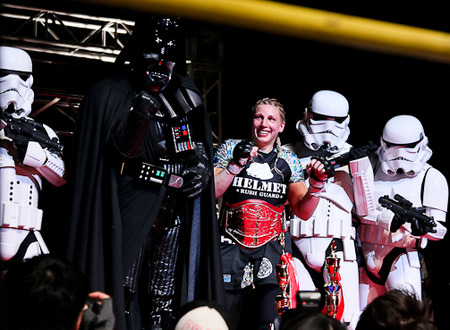