Evening and weekend website editors often can find themselves scrambling for ideas late into the evening. They try for catchy headlines to grab the eye, and look for ways to get creative and get the casual web surfer engaged.

ESPN put together a Knicks-Hornets recap Friday and as they invoked Jeremy Lin's performance in the headline, they made a mental error of fairly epic proportions. Head after the jump to view a screen shot of the headline as it appeared on ESPN Mobile. 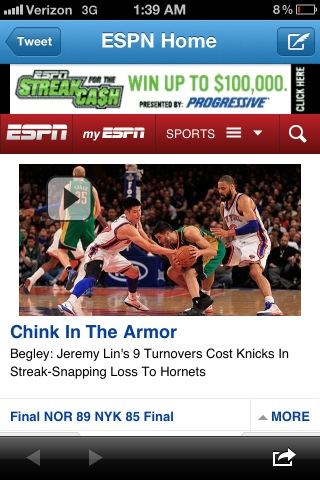 Yes, somebody thought that was a good phrase to use in describing Jeremy Lin's poor performance in turning the ball over nine times. Lin did struggle and it is worth noting, but it boggles the mind that somebody would think using that word was a good idea.

ESPN subsequently changed the headline to "All Good Things..." and issued an apology. They have to be hoping most people did not see the original headline, but thanks to a quick screen shot, it now gets to live in infamy. Another brilliant move by the World Wide Leader.