You might not remember this racist photo from the 2008 Olympics in Beijing from the Spanish national team. But it was pretty bad. Click here to view it or you'll see an edited version of the photo after the jump.

Jeremy Lin, take your revenge on these Spaniards.

Lin has won his last three games with a Spaniard from that team featuring prominently on the roster. 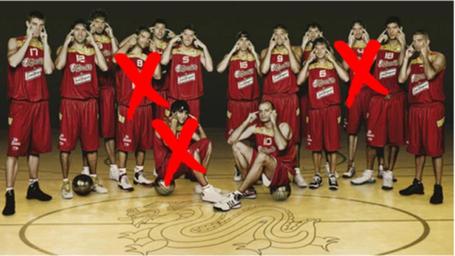 All that's left to complete the NBA circles are two more players: Rudy Fernandez of the Denver Nuggets and Marc Gasol of the Memphis Grizzlies. Unfortunately New York has already played both of those teams sans Lin, so they'll miss out on those revenge games until 2012. Lin will have to sub that with two more matchups with Calderon.

To talk about Lin and the Knicks, head on over to Posting and Toasting.