Can Alex Morgan Be The Breakthrough Star US Women's Soccer Needs?

United States women's soccer striker Alex Morgan had a spectacular coming-out party in the 2011 World Cup Final against Japan. Her brilliance might translate beyond the field, as she could help save and elevate professional women's soccer in America.

Share All sharing options for: Can Alex Morgan Be The Breakthrough Star US Women's Soccer Needs?

Alex Morgan had the biggest game in the biggest stage, but unfortunately, all she had was a defeat to show for it. She knocked in one goal and assisted on another, but it was Japan that raised the trophy on Sunday night in Frankfurt, and it was Morgan who held her head low. She was the biggest winner of the losing team, but it's doubtful that made much of a difference to her or to many of the Americans watching.

Morgan might have lost the war for the World Cup, but there's a possibility she could have started winning a far more crucial battle for her sport. The power of Morgan might go well beyond her elegant strikes and deft touch on the pitch. Morgan could very well be the star that has the potential to lift up women's soccer. 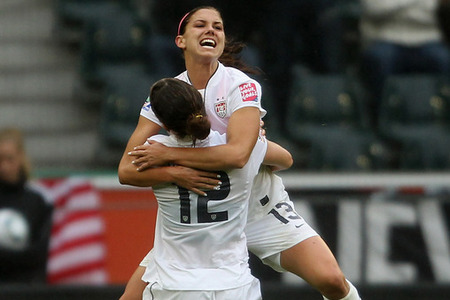 Women's soccer has always been much beloved in the US, particularly at the youth and adolescent age, but something gets lost when it transfers up to the next stage. It's hardly through any fault of the players, who from Michelle Akers to Mia Hamm to Abby Wambach have ranked among the best in the world in their time. And they have received plenty of sponsorship--Nike and Gatorade have been prominent sponsors of US Women's Soccer for ages.

Yet despite all that, despite attracting the best soccer players around the world to women's soccer leagues in America, despite the great support among young female youth in the States, women's soccer lives on the edge in America as a spectator sport. The WUSA folded after three years, and Women's Professional Soccer is struggling to make ends meet as it approaches the three year mark (several teams have folded in the past year). Unlike tennis, there is no national platform outside the World Cup for the players to get on TV regularly, and they must compete with the MLS for fan support. It's a battle they will always struggle to win, particularly with no strong figures like the Williams sisters to charge the national interest.

Much of that is due to the lack of a discernible star power--soccer, like basketball, needs its stars, and in particular American stars. Michelle Akers was a pioneer, but her greatest moments came well before TV turned its eye to the sport. Hamm's prime also unfortunately coincided with a time where women's soccer did not leave the stadium--she was 27 by the 1999 World Cup and had already notched up two-thirds of her goals, and most fans only knew of her due to her famous spots with Michael Jordan.

Wambach is a tough character that seems more fit for a game of rugby sevens than soccer. but she simply has not Hope Solo could've perhaps been that figure in 2007, but her controversial tirade against Brianna Scurry inflicted years of damage to her name that took this World Cup to finally undo. At the age of 29, her return to the next World Cup is questionable. In fact, when you think of women's soccer, it's probably Marta who comes first to mind, but her brand only grows the sport overseas without helping the teams in America. 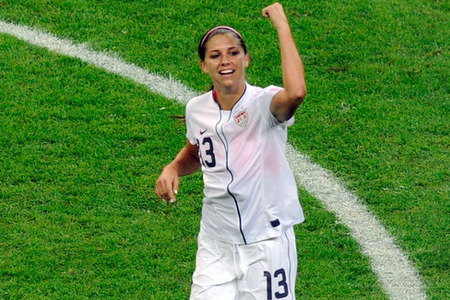 Enter Morgan. At the age of 22, her best years are well ahead of her as an athlete, and unlike Hamm, she enjoys significant advantages. She plays the most attractive position on the field that'll give her plenty of opportunity for individual success. She has 24 hour sports cable channels like ESPN (but also the Fox Soccer Channel) that can distribute her brilliance as a tactical striker and replay her highlights, distributing her individual talents all over the world.

Add to that the impact of the digital age, and you see the potential for Morgan thriving in every platform of media. She has a vast Internet following that only grows by the days. And she provides America with its first potent female team sports star since Hamm. Additionally, with the US men's team stuck in perpetual purgatory, she has a chance to become the biggest American soccer star of this decade. Landon Donovan and Clint Dempsey are passing through their primes, and Morgan will have a great chance to shine.

In a year, she'll be back on the world stage for the London Olympics, where the US women's national team will again get a chance to claim the prize for best in the world. If she can replicate her brilliance on the field in the professional leagues, women's soccer in America will have their much-needed American superstar, someone who can bring people in on a day-to-day basis. 15,000 attended a game between Morgan's Western New York Flash and magicJack last night, and if these effects can sustain themselves over the upcoming months, perhaps there will be hope for the sport long-term.

And if she can sustain her emergence into one of the world's most preeminent strikers, Morgan might not just be the victor on the field this time. She could be one of the potential saviors of the sport off of it.