The 2011 Zazzle Bay to Breakers race has made some changes from years past when it comes to organizing the 55,000 runners that will be making their way through the streets of San Francisco. There are 55,000 registered runners, but there are also thousands of people who just join the race on their own without actually registering.

The registration filled up incredibly quickly and so the organizers decided to bump the start time from 8am to 7am. In order to better accommodate all the runners, the organizers have implemented a wave system that schedules "runners" in their different "corrals" to start in incremental steps. The seeded runners and runners in corrals A, B, and C will all get started at 7:00am. Corral D will start between 7:30 and 7:45, Corral E between 7:45 and 8:00am, Corral F between 8:00 and 8:15am, and Corral G between 8:15 and 8:30am. Here is a breakdown of where each corral will be based: 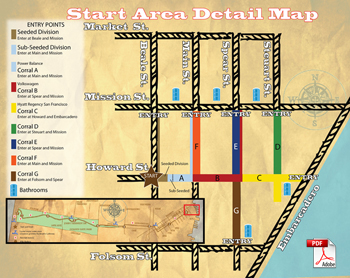 While the wave scheduling system is new to the race, the course remains the same. The B2B website describes the race best:

From sea level at the Embarcadero the course rises steeply along the Hayes Street Hill. Around the 2.5-mile mark runners climb an 11.15% grade between Fillmore Street and Steiner Street. The remainder of the course gradually flows downhill alongside the Panhandle through Golden Park to the Finish Line at the Great Highway.

You can view a course map below and view a bigger version by clicking the Bay To Breakers link below the map.