Josh Smith of the Atlanta Hawks is probably one of the most talented players in the NBA with his incredible athletic leaping ability and shot-blocking/rebounding aptitude. In Game 4 of the Eastern Conference Semifinals against the Chicago Bulls, he combined those talents with pure, all-out effort.

It's not an easy thing, being a physically gifted NBA player. Yeah, you heard me right.

There's no doubt you can ball.  You can leap higher, jump taller, dunk effortlessly, sometimes flat-out dominate on nights that make the other teams feel like it isn't fair. Your physical imposition can be good enough to win you a game here and there when the other team clearly isn't playing up to their best.

But mentally? Often, the game doesn't catch up with you. You spend so much time being better than everyone, that when you hit a wall and face guys who play harder than you, it's tougher to focus, to make the right decisions, and your play looks downright lethargic by design.

In the playoffs, that doesn't happen enough, if at all. Smith seems to always struggle deciding what to do, because he is that talented. His body seems to be pulling his mind in millions of directions. Because he can do this, this, and this, he can't decide on what the right thing to do is when he's given the ball and asked to create.

And thus, all too many times, he pulls up for the jump shot, the only thing Josh Smith isn't very good at. And Phillips Arena groans like their child has to repeat the fifth grade. 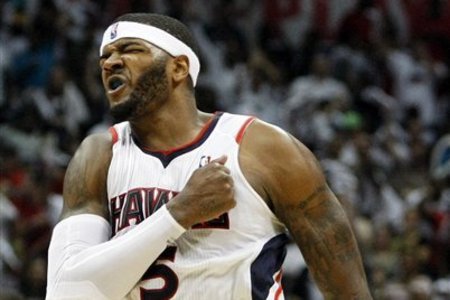 The pure athlete, the one who dominated high school and college with his overwhelming talent, always seems to find himself hitting the wall after a few games of wreckage. Athletes aren't used to facing adversity, because generally their competition is too weak, too timid to be judged correctly. Especially for someone like Smith, who jumped straight from high school to the pros, finding competition that equals his athletic ability isn't easy.

Charles Barkley is perhaps the best example of talent meets effortless. He was a force of nature, particularly on the fast-break, when all he had to do was take the basketball, run like a bullet train down the court, and either lay off the ball to a teammate or dunk that ball inside. The Barkley fastbreak was one of the most unguardable moves in all of sports, something you just had to hope he'd flub.

However, Barkley was not very committed with his work ethic, and his game suffered. Too many times he'd make bad decisions in the half-court, would try to take the ball and create (with disastrous results), and just made poor defensive decisions. Compare him to the not-as-gifted but totally workmanlike Karl Malone, and it's clear why Malone became the best power forward of his generation. Malone did a few things, but he did them great. Barkley tried to do a lot of things and results varied.

Josh Smith is the example of this uberkind of athlete, the guy who got up and touched the Milky Way. His leaping ability is the type that makes everyone swoon with envy, because that vertical can give a ballclub so many valuable things--dunks, rebounds, blocks, highlights, the whole package.  But because of his multidimensional style of play, Smith is often tough to crack, particularly when the game is not going their way. Smith will try to block the unblockable, get out of position when trying to rebound, miss his dunks.

It can eventually hold him back, because talent gives you false perceptions about your game. You don't have to work as hard. You don't have to give it your all because you can do these things all the time. Everything ends up more halted, more stilted, more average. And suddenly Josh Smith becomes disappointing to all those who can see the talent he's blessed with but doesn't use.

And worse, he settles for that jumper. That all-too-easy, all-too-difficult jumper that often clangs off the backboard. 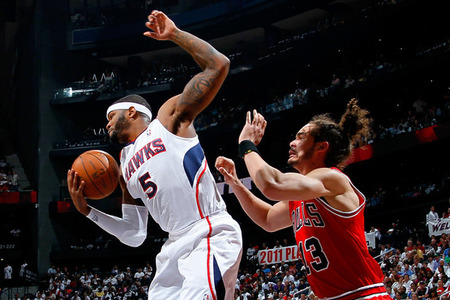 Sometimes with athletes, you've got to let other guys take over and tell the athlete to go where he's most necessary. Whether it was by design or by gameflow, Game 4 provided Smith with an optimal way to make his will felt: Hang around the rim, run the open lanes, play off the ball, and good things will happen. We know what you're good at Josh; we'll let you get to it.

The Hawks finally got Smith going in the 4th quarter by doing what should have been done a lot earlier--let point guard Jeff Teague handle the ball, give Jamal Crawford and Joe Johnson the majority of the isolation one-on-one possessions, and work off the ball. The results were impressive, as Smith made many of the crucial baskets and grabbed many of the critical boards to ensure a Game 4 victory and a 2-2 series tie with the Chicago Bulls.

Smith didn't have a great game shooting-wise (8 of 22), but his charges to the basket earned him nine free throw attempts (swishing seven), and playing clean-up man, all five of his offensive rebounds led to Hawks points (4 for 4 from the field, plus a foul drawn). Add in his 16 rebounds and clear passing vision on quick hits with 8 assists, and the Hawks find themselves two victories away from the Conference Finals.

Talent is what can give players the glimmer of greatness. Talent and effort? That's what make players special. And games like Sunday's make you wonder if Smith is indeed capable of putting it all together and becoming that special type of talent that can wreck games with his ability. Only the next game will tell us, because as we know far too often, talent sustains. Effort comes from within.