Moment Of Zen: Phil Jackson Could Not Master These Befuddling Los Angeles Lakers

Zen Master Phil Jackson did not have a great finish to his NBA career as he saw Kobe Bryant and his Los Angeles Lakers fall to the Dallas Mavericks in a stunning four-game sweep in the Western Conference Semifinals.

Share All sharing options for: Moment Of Zen: Phil Jackson Could Not Master These Befuddling Los Angeles Lakers

This is how it ends for dynasties. Hubris, arrogance, indifference, stupidity, fatigue. The Los Angeles Lakers have played with that hungover feeling all season, and it finally culminated in an inglorious end to the Phil Jackson era on Sunday afternoon.

In some ways, it was fitting that the Zen Master let his team try to figure out how to play with each other all season. Unfortunately, unlike so many teams before it, this team had no answers. The Lakers stopped running their offense, stopped playing together, stopped helping each other on defense, stopped playing the way that won them two titles. It was fitting that their end in Game 4 was so one-sided, so devastating.

Jackson can't really be happy. But in some ways it seemed to define his overwhelming philosophy about basketball. The Lakers were inconsistent all year. They charged through the early part of the schedule. They then fell apart for numerous losing streaks and incomprehensible losses to the dregs of the league. They considered trading the oft-injured Andrew Bynum back, only to see him return and become a dominant defensive force that charged the Lakers through a 15 game win streak. And  they stumbled through the end of the season and let Chris Paul drag them through six games.

In many ways, this group of Lakers deserved to be put to the sword this season. Too long they had coasted on their talent and summoned it only when it was absolutely necessary. They relied too often on the narrowest of margins to finally start playing like the best team in the league. It was often insulting to watch them go through the motions for most of the season, only to see them hit the wall in too many games.

It was time for it to fall. Even Phil Jackson can appreciate it, and he didn't seem too distraught that it ended this way. It wouldn't be too surprising if he saw this coming. 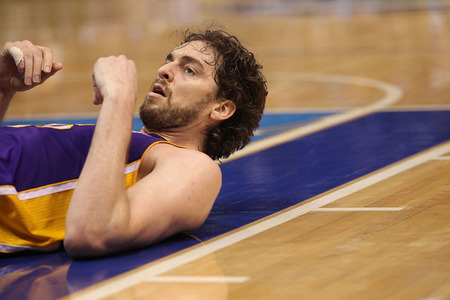 It's hard to pinpoint any individual factor for the demise of the two-time defending champs. The immediate and obvious scapegoat would be Pau Gasol, who averaged only 13 points and 8 rebounds a game. But Gasol also had to play hot potato with Bynum at center, and Gasol has always played better as the true center on this team. Gasol had to spend most of his time playing power forward with Bynum on the court, and his jump shot was just not there.  This is not an easy transition for a big to make, regardless of talent level.

Add in the fact that he had two terrible matchups in the first two rounds with Carl Landry and Dirk Nowitzki (two mobile bigs, one who can drive to the basket and pound the boards, the other who can create his own shot from anywhere on the floor), and it's hard for me to really lay the blame solely at Gasol's feet. He could've played better, yes, but it probably wouldn't have as much of a difference as people think.

Bynum played very well, but is pretty much Dwight Howard-lite; a strong defensive anchor that was an offensive liability late in games. The Bynum-Gasol dynamic has actually bothered the Lakers all year long, because Bynum had to play in the post way more often than Gasol. Bynum can't shoot jump shots, but is only marginally effective in the post; Gasol can shoot from the outside but is generally more deadly when he operates purely out of the post. The spacing of the triangle offense was wacky all season, and seemed to serve the idea that you can have too much talent on the floor and see the offense suffer.

Derek Fisher? He's an older version of the same type of guy he's been the past two years; taking bad shots, playing bad defense, and occasionally coming up with some big shots and veteran leadership down the stretch. The decline of Crazy Pills also played a factor; Ron Artest brought very little to the table, just doing Ron Artest things like earn a one game suspension in a game the Lakers already lost, and jump a foot too short on a breakaway layup.

No, the issues with the Lakers seemed more team-oriented, and it started with a bench that went rogue.  Lamar Odom was his usual mercurial self and couldn't find himself touches. Steve Blake, Matt Barnes and Shannon Brown were flat-out destructive, making stupid plays, throwing the ball away, taking poor shots, missing layups, allowing Dallas more possessions, more opportunities, more victory.

More importantly, the defense just wouldn't find itself. Dallas found wide open three after wide open three when one Laker would rotate, but the second man wouldn't switch back. Jose Barea attacked the basket with abandon when a Laker big came out to try and trap, and the help defense at the basket wasn't there. Nowitzki busted up any defense the Lakers threw at him, and when they double-teamed/triple-teamed him, he found Jason Terry and Peja Stojakovic wide open. Great ball movement and great spacing by Dallas; poor rotations and adjustment by LA.

The Laker defense that won them championships finally gave out. No one wanted to compete enough through one more go-around. Gasol, Odom, Fisher, Artest, the bench ... all are culpable to some extent. Teams don't get swept because of one player underachieving. Teams get swept because everyone isn't doing enough to help each other. It looked like this time around, the Lakers finally had no effective response. There would be no last summons, just a few pathetic cheap shots by Bynum and Odom. The dynasty died in flames, as most dynasties tend to do. 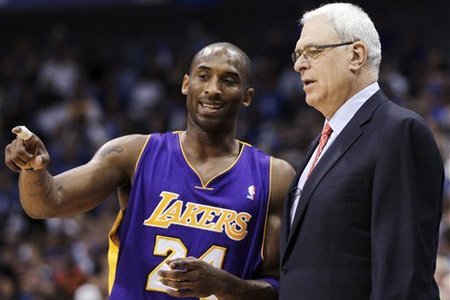 And of course, we get to Kobe Bryant, Jackson's final and most fascinating study.

Frankly, Bryant is probably at the most teachable part of his career. He finally understands. He's learned all the lessons that Jackson tried to impart with him through those bumps in the road during the first go-around, when Phil deemed Kobe 'uncoachable', when Kobe deemed Phil an 'old man'. While he might not always go about it the right way (should've gone to college Kobe), he does seem more cerebral, more relaxed, more at peace in the way he plays the game than the cold fury he exhibited in years past.

But while his mind might be all there, his body is finally giving way. Bryant spent much of the Mavericks series getting bodied by 38 year old Jason Kidd and found himself unable to muster an effective response. Bryant went to the free throw line at an alarmingly low rate in the Mavericks-Lakers series, attempting only 15 free throws throughout the series. The spring in his legs that once made him the most unguardable cover in the league can no longer drive to the hoop on a consistent basis. He can no longer finish off games the way he did last year against Phoenix, the year before against Denver, the year before against San Antonio.

So when Bryant comes out and starts gun-slinging like he did in Game 4, it no longer just hurts his team, it obliterates their chances. The rest of the team can't step up with Bryant taking the majority of the shots, and by the time he did start involving everyone else, it was over.

It's fitting that the final chapter of Phil and Kobe's career together ended the way it started. Phil Jackson never really cracked Kobe Bryant, never really got him to buy into the way he should play in his offense, play as a team. They ended up compromising, like so many great tandems have, and tried to meet each other halfway. Run the triangle sometimes, run through Kobe sometimes. It was a frustrating arrangement to fans of basketball, to people who remembered Jordan and Pippen run the triangle to such deadly effectiveness in the 90s, to see Kobe only do the right things every other game.

Still, the arrangement worked out alright.  Compromise with Kobe brought Phil two more titles, elevated him over Red Auerbach as the most decorated coach in any major sport. Compromise helped him turn Gasol into one of the most gifted big men in the league, putting him very close to future Hall of Fame status after his career looked lost in Memphis.  It worked out for two titles, but not for a third--after all, compromises don't really exist to make everyone happy.

After all, in Zen philosophy, there is no such thing as a happy ending. There is only existence. The Zen Master was as much a witness to his basketball sendoff as the rest of us. He probably didn't want to go out that way, but compared to the breadth of his experiences in over four decades of basketball? Just a drop in the water.