Kevin Durant & Russell Westbrook: Kind Of Like Shaq-Kobe, But Not Really

Kevin Durant and Russell Westbrook of the Oklahoma City Thunder do seem to share a similar dynamic in their relationship on the court as Kobe Bryant and Shaquille O'Neal of the Los Angeles Lakers did, but the acrimony just isn't there, and their ability to share the ball is much greater than Kobe's and Shaq's.

Students of basketball history are familiar with this scenario. Two immensely talented athletes teamed up on the same basketball team around the same time. Both play extremely well and are hyped as the next big thing. Both are generally well-liked.

Then the lights turn bright, the world starts paying attention to them, and they struggle to mesh in the playoffs. And everyone starts wondering what's going on.

Russell Westbrook and Kevin Durant of the Oklahoma City Thunder are the latest to fill that label, as they now find themselves down 2-1 against the Memphis Grizzlies after blowing a sizable second half lead. Neither Westbrook nor Durant played well, particularly on the perimeter--Durant was 7 for 19 on his jumpers, Westbrook 4 for 16. For all the question marks the Miami Heat face on a daily basis about how Dwyane Wade and LeBron James share the ball, it's the Thunder's two biggest stars have struggled to mesh for the fourth time in these playoffs.

It's not too hard to point at Shaquille O'Neal and Kobe Bryant as the easiest parallel. Both players demanded the ball, sometimes rightfully, sometimes wrongly. Shaq ended up shouldering the burden for the most of the early part of games while Kobe took over during the end. It was a strange dynamic that ended up paying off in championships, but it was never really comfortable, and it eventually blew apart. This is the dark and dangerous road many Thunder fans fear will happen with Westbrook and Durant will take, as they struggle to share the ball in situations.

And that's about where the similarities between the Westbrook/Durant and Shaq/Kobe dynamics end. 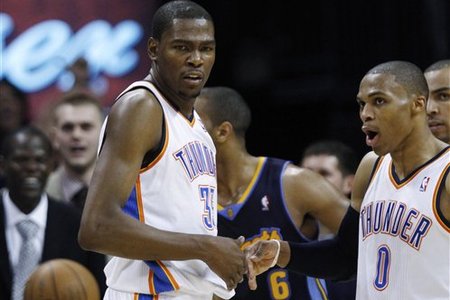 Anyone who followed Shaq and Kobe knew the undercurrents of resentment were there early on. Kobe was a hot-shot kid from Philadelphia who was still growing into his body and his play when the Lakers started winning titles. Shaq was the establishment, a dominant force even when he wasn't really playing up to his level of play. Both of them had issues from the start with each other, not just on-the-court, but off-the-court too.

You don't really get the sense Durant and Westbrook harbor any animosity toward each other for their struggles. They were selected one year apart in the NBA Draft. They've both grown up together in the league (Durant in his fourth season, Westbrook in his third), making it hard for me to believe there's a rift in the making in Oklahoma City.

Point is, they're still growing up. Durant still talks about trying to be more assertive, and he's only doing it in spurts (like he did when he took over Game 5 of the Thunder-Nuggets series). Sometimes he still gets pushed away from the play and doesn't fight for the ball. You figure with a few more series, a few more years, and Durant will be the guy willing to muscle his way for position, demand the ball and go with it.

Westbrook often talks about how he gets too caught up in the pace of the game, and often tries to go too fast. It might not make too much sense to you for a pro basketball player to be like that, until you realize he's 22. Not everyone can be like Derrick Rose out of the box.

Positionally, it's drastically different. Shaq was great, but was sometimes limited by the ability of his teammates to get him the ball. Kobe was the only one who could really create, but often ignored Shaq because he thought he had a better look (well, Kobe thought he had a better look; the rest of us were wondering what he was doing). The fact that neither could challenge the other in practice, nor could understand why they didn't do the things they wanted to do always held them back from growing and evolving together.

As perimeter-oriented players, Durant and Westbrook can both create, and thus can share the ball a little more easily than a center and a guard. They can both take the ball and make something happen for themselves or a teammate off of dribble-drive, pick and roll, or isolation shots. Their two-man game is still a work in progress, but it has the potential to be very effective given time.

Occasionally though, it doesn't work out. Sometimes they make poor decisions, sometimes they have a tough time adjusting to the defense. Westbrook struggles because his jumper isn't good enough and his finishing ability needs polish; Durant struggles because he doesn't always fight to get to his spots on his floor and can't always create jumpers for himself. And sometimes, Scott Brooks doesn't seem to give his two best players the best options when diagramming plays for them.

Additionally, much like Shaq and Kobe, Durant and Westbrook seem to be stuck too much on their own islands, creating options for other players who often can't finish the job when given the opportunity. Much like those Lakers had Rick Fox, Derek Fisher and Brian Shaw to occasionally nail down shots, the Thunder have to rely on James Harden, Thabo Sefolosha, Kendrick Perkins, Serge Ibaka and Eric Maynor for offensive support. Jeff Green might not be totally missed, but the lack of that third offensive option certainly hurts OKC in close games, because they often have only two or three (if Harden is on the floor) viable offensive options. That leaves Durant and Westbrook needing to do their own thing, and they struggle having to carry that extra burden.

There are a lot of things working against the Thunder in their second stint deep into the playoffs. But it doesn't feel like it's an issue that will destroy them from within. These are issues that can be fixed with patience and growth, as long as you ignore the manufactured narratives the media brings up. 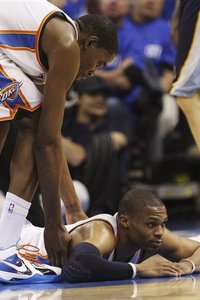 It's again worth noting how young these two phenoms are. Both are 22 (yes, they've barely had a year and a half under their belt to hit the bars, if they're into that sort of thing), and are still years away from hitting their primes. They might need a little more time to develop to get to where we want them to be. Remember they're still only in their third playoff series together, with a team still learning to play as a unit, with two stars still learning how to perform, how to play playoff basketball.

Bill Simmons of ESPN keeps on talking about how Durant and Westbrook might be headed for Avon Barksdale/Stringer Bell territory. However, Kobe and Shaq have already served up the Stringer-Avon narrative. One wanted his corners, the other strived to move beyond that. They ended up hurting each other, potentially damaging both their legacies. Although they survived and found their own ways after that, neither has really been the same since.

Russ and KD just don't have the same vibe. It's too early to apply that kind of rough-and-tumble gangster bull**** to them. If anything, they're more like Han Solo and Luke Skywalker stumbling through the Death Star, trying to save Princess Leia. One's a bit of a rogue, the other's still wide-eyed and not assertive enough, but both have good intentions in the way they go about their games.  Perhaps they have personality flaws, but they aren't damning, and they certainly don't look like they'll destroy their Thunder long-term.

Everyone else? Be patient for once. Their journey is just beginning. We can only watch and see where they take us.