The 2011 Amgen Tour of California reached arguably the toughest climb of the race and race leader Chris Horner emerged from it with his lead still intact. Radio Shack teammate Levi Leipheimer claimed Stage 7, but the teammates were neck and neck at the finish line. Given the fact that Horner would retain his overall lead, Leipheimer receive the honor of claiming stage victory.

Here is a quick screen shot of the provisional results from the seventh stage. 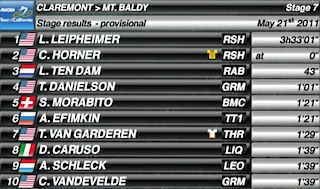 Laurens Ten Dam claimed third place in the stage, finishing 43 seconds behind the Radio Shack teammates. His finish allowed him to climb from ninth place to sixth place overall, 3:26 behind Horner. As the race heads into its final stage on Sunday, Horner retains his :38 second lead over Lepiheimer. More importantly, provisional overall standings would indicate he was expanded on his lead over third place and beyond. He entered the day leading Leipheimer by :38 seconds, Rory Sutherland by 1:38 and Christian Vande Velde by 1:39. At the end of his climb up Mount Baldy, Horner now leads third place Tom Danielson by 2:45, and fourth place Vande Velde by 3:18. It would seem safe to say Horner is in the driver's seat to emerge victorious in Thousand Oaks following Sunday's final stage.

Here is a quick look at the overall standings: 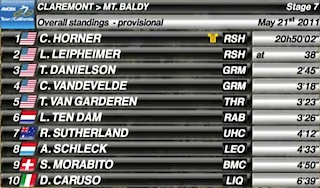 We'll have more race updates in our 2011 Tour of California story stream, and you can find more in-depth discussion of each stage at Podium Cafe.