The 2011 Bay To Breakers festivities wrapped up on Sunday and thankfully the Internet provides numerous ways to enjoy some of the finer moments of the madness. Thanks to the power of home videos, we've got footage of an early stretch of the race route South of Market around 4th and Howard. At the bottom I've posted some video that is part of an eight-part series of video shot at this location. A quick YouTube search of Bay To Breakers 2011 will yield the remaining sections of the video.

The video we've provided below is a good cross-section of the race. Part one shows you the world class runners, with the occasional blue Smurf walking by at the bottom of the screen. Part two shows some of the serious but not world class runners, along with some quality costumed folks. Part seven allows you to see the people with no intention of taking this race too seriously.

I'm waiting on some pictures from the race, but Twitter has come through with some solid photos throughout the day. For example, if you were wondering what Manny Pacquiao has been up to since his dominant victory over Shane Mosley, he was clearly using that fight to prep for Bay To Breakers:

It wouldn't be Bay To Breakers without an appearance by Leia and Han Solo:

Given that the weather turned out particularly nice for the race, I guess these folks just qualify as overly-prepared?

When in doubt, bring bacon:

The Ultimate Warrior has reportedly been a little nuts in recent years. Good to see he was calm enough for B2B: 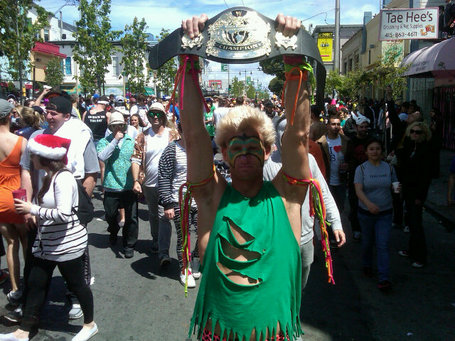 Bay To Breakers Part 1 of 8

Bay To Breakers Part 2 of 8

Bay To Breakers Part 7 of 8