LeBron James and Dwyane Wade of the Miami Heat proved they could beat the Boston Celtics playing at their best. But can the Heat continue to do this throughout the NBA Playoffs against the remaining teams like the Chicago Bulls, Dallas Mavericks and Oklahoma City Thunder?

In a furious destructive flurry of threes, ferocious defense and impossible looking shots by LeBron James, it all ended for the Boston Celtics. The Celtics fought for 45 minutes to force a Game 6 back home, and the Miami Heat took three dominant minutes to erase it all and end their mini-stranglehold over the Eastern Conference.

Well, ok, it wasn't really the Miami Heat doing it as a group. It was LeBron reminding us why we so feared this team in the first place, why his narrative defied. James stood back, took those ugly jumpers everyone wishes he wouldn't take, and nailed them both. One obscene triple from the corner over Paul Pierce to give the Heat the lead, then a dribble-dribble-dribble possession that ended in another fadeaway three to seal the deal. A dunk later was only the icing on a very delicious cake, one filled with shamrocks and bathed in Irish whiskey. 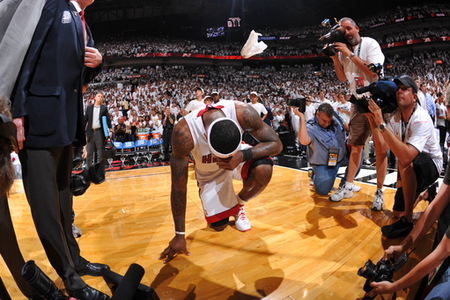 While the quest is far from finished, the emotion James must felt at finally being able to knock off Boston was palpable. It was the Celtics that thwarted him in Cleveland when he had two legitimate shots at getting back to the NBA Finals. It was the synergy of the Celtics that frustrated him when it often felt he had to carry the Cavs night-in, night-out to victories. It was the talent of Boston (having three Hall of Famers, with an All-Star developing right next to them) that ultimately made him realize he'd struggle ever winning a title with Anderson Varejao and Anthony Parker as his wingmen, and made him seek out Chris Bosh and Dwyane Wade. It was a questionable decision, perhaps even a cowardly one.

With the Celtics now gone though, I doubt it's a decision James regrets. And his final two minutes proved why he is the best basketball player in the league. He makes bad decisions look better than anyone else because they aren't terrible decisions for a man of his talents. He finished the job he couldn't do in Game 4 in Boston a year ago, in Game 7 in Boston three years previous. He put the wounded green-eyed monster out of its misery. 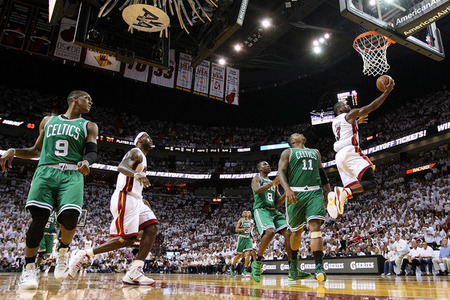 The best of LeBron in Game 5 was coupled with the best of Wade. In a strange reversal of fortune, Wade dominated much of the early part of the game, and LeBron took them home. With Boston playing pretty solid basketball and threatening to pull away in the first half, Wade pretty much kept a struggling Heat squad afloat with drives, floaters, putbacks, steals, dunks, free throws (so many free throws), and an array of finishing moves.

It was one of those displays that made you harken back to the best of the Shaquille O'Neal-Kobe Bryant era, when two of the best players in the league could carry their team for individual stretches without much. It's disjointing and a little depressing to see teamwork and the five man game be relegated to one man talents trumping all, but basketball has been working like this for awhile. Wade and James provide a gentler version of this fractured but compelling basketball, and it's worked to take out two teams ill-equipped to handle their talents in succession.

Now the two Miami superstars provide the league a terrifying glimpse of his powers on a team where they share the load rather than carrying it. The struggles of the Heat seem like lifetimes ago. 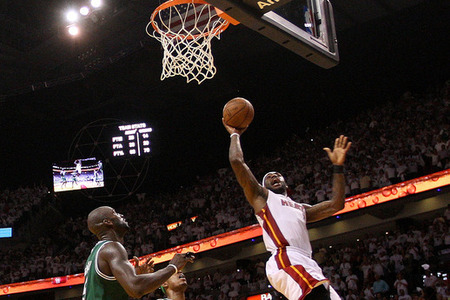 It seems when it came to casual or diehard basketball followers, almost everyone reveled in (or was disgusted by) the early struggles of Miami. The Heat couldn't gel, or mesh, or score, or play big, or win. They spent a lot of the time playing well below our curious expectation baseline, and that wasn't good enough. Bosh got savaged for most of that stretch. LeBron James was renamed LeChoke, LeB***h, LeBronze, LeQuit, as the late-second failures grew, and grew, and grew. Wade at times looked like he didn't know how to handle balancing the load between the two, vacillating between good and terrible games. And the supporting cast looked ten thousand types of awful, with Mike Miller forgetting how to shoot three pointers and Big Z losing the outside game that made him such a versatile center in Cleveland.

But masked behind all that open glee were our own hidden fears. We all knew what Miami could play like when they were unleashed, when James and Wade were meshing, sharing, and flourishing. The beast that ran roughshod over the NBA in December and January was a team none of us took quite as seriously as we should have, but it did show off the type of team Miami could be when they were firing everywhere.  Even though they struggled to close out close games, most of their losses were by the slimmest of margins. They weren't getting slaughtered, just maimed for not playing up to the incredible standard they set for themselves.

This team wasn't as bad as it looked, and now they're as good as they've ever looked. It's a scary prospect for the rest of the league to deal with. 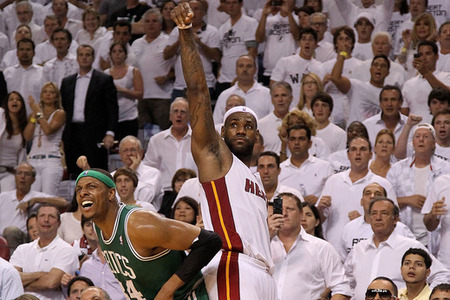 That's the big question with these Heat. They're great frontrunners. The Heat had the second highest point differential in the league and were very good at kicking teams when they were down. Now they've won both their playoff series 4-1. Plenty of competitive games were contested in that ten game stretch, but the Heat were never in a disadvantageous situation--always up, always on top after Game 1 victories, Miami always looked cool. But they were never seriously threatened.

How will they handle a series that runs longer and deeper, facing teams with decent starpower but also the depth to overwhelm Miami's? Don't think Chicago, Dallas or Oklahoma City (their three likeliest foes) will be wounded like Boston or inexperienced like Philadelphia; all of the teams remaining are quite talented, but also deeper, and can expose the flaws of this Heat team (which still too often run only three to four deep). Everything is still very much in flux, even if the Heat's position looks stronger with every win they bring.

LeBron James and Dwyane Wade proved they could beat the Boston Celtics, but they didn't team up to just beat the Boston Celtics. With the Los Angeles Lakers now lounging in Hollywood,  the path is open for them to start backing up their bold claims of titles galore coming to South Beach. It's title or bust for these Heat, and they know defeat further in these playoffs will reopen the wounds, recast doubt on their lofty aspirations.

Sixteen wins are required to fulfill the epic task they set at their early coronation in July. Eight down, eight more to go until the real coronation can come.