Derrick Rose of the Chicago Bulls is a remarkable player, but he's needed all the help he can get in this series from all of his teammates. Rose led the way, but the efforts of Taj Gibson, Omer Asik, Luol Deng and Ronnie Brewer really pushed the Bulls to a 3-2 series lead over the Atlanta Hawks.

Tuesday night in the United Center did have that feeling of a Chicago Bulls playoff game. A star again was lifting the Madhouse on Madison like it had a decade and a half ago, and was moving the Bulls closer and closer to another shot at an NBA title.

Derrick Rose took over the fourth quarter offensively for the Bulls, using a series of drives, jumpers, and free throw trips to push them to a 3-2 series lead over the Atlanta Hawks. Atlanta kept on coming, kept on trying to get over that gap and nail down a critical win, but Rose would have none of it, and his efforts have the Bulls in a pretty comfortable position to get to the Eastern Conference Finals.

I did find this game to be a solid reflection of what this Chicago team is all about, and why they have as good a shot as anyone at the title. 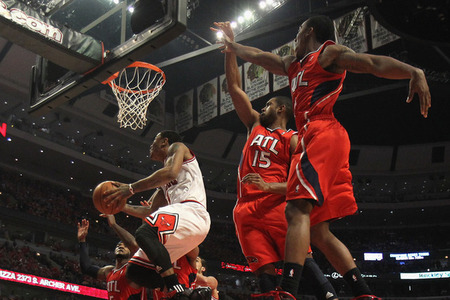 Watching Rose, it's easy to see why he's become such a polarizing figure among NBA followers. He's great at one end of the floor, but so very average on the other end. He torched Jeff Teague for 33 points as expected, only to see Teague torch him right back for 21 (on only 11 shots!). The MVP award didn't really , because in occasional fleeting moments, you weren't even certain if Rose was even the best point guard on the floor.

What made Michael Jordan so special to watch was that he was not only the best offensive player in the NBA; there were times he could be the best defensive player too. Scottie Pippen tended to fill that role the other half of the time, and he had his own unique brand of offensive gifts. At this point, Rose is pretty much one side of the floor, Steve Nash without the Canadian blood. Greatness can definitely be floated at times with his game, but it cannot yet be bestowed on him.

That doesn't take away from how incredible a point guard he is. Rose is one of the most unstoppable players I've ever seen dribble drive and finish; he weaves and bobs in angles, making the defense try to adjust in microseconds, only to see him keep on changing direction, changing speed, use quick moves, hopsteps, bank shots, floaters, semi-hooks, up-and-unders ... it's an incredible display of soft power in action, fluid and stylish like the smoothest of jazz albums.

Still, a guy like Rose couldn't do it without others stepping up. He's a great player, but if he's the guy on your island, you'd better hope the other team is clanging all their shots. 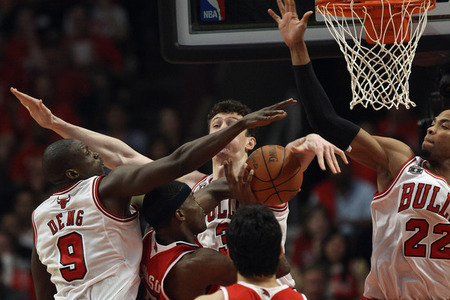 Asik badgered Al Horford all throughout the 4th quarter and would not let him get going. Gibson provided that second spark plug Rose so desperately needed, frustrating Josh Smith on the defensive end. Brewer and Deng continued to make life miserable for Joe Johnson and Jamal Crawford, who finished a combined 7 for 24 (Crawford went a horrid 1 for 9).

On a unit that's become known for their defense, it was defense that shut down Atlanta from what would've been a big-time Game 5 win, as the Hawks put up a meager 15 fourth quarter points and stopped running plays, returning to their isolation-happy ways and clanging jumper after jumper. Before they realized it, a tightly contested swing game had become a double digit rout, and the Bulls climbed out with their D.

That's what Chicago is good at--getting you out of your comfort zone, getting you to play a way that hurts you. They don't need to play well to win when  they can make you play the way they want and win. And in the playoffs, that is one dangerous skill to possess.

MJ and Pippen led the Bulls in almost every facet of the game on their drive to six championships. Here, Rose leads, but there are plenty of Bulls with plenty of facets on this team. Everyone contributes given the opportunity, and tonight Rose needed a lot from all of them to get to this advantageous spot. And he'll need much much more to get past the dangers looming ahead.  They'll have to be ready. 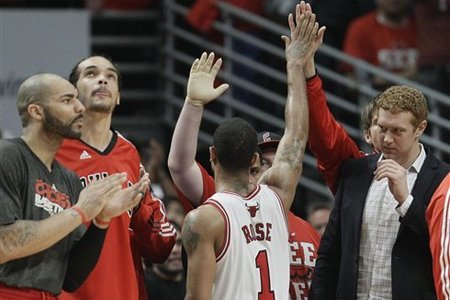 Do I think these Bulls are a great team? No. They have flaws, and they'll probably become more evident as time goes on. They can be toppled if a talented group comes along and executes their gameplan, and the Miami Heat are one win away from being that guinea pig.

However, I do think they're a team with great teamwork and synergy. Everyone can lift each other up and provide something new to the table, and it's not just one random performance but a collective of sorts. You're down, I pick you up. It's been that way all year for this Bulls team--even if other players aren't having their best games, there are others ready to carry the burden.

Pippen was courtside for this one, taking it all in. He applauded the effort, the defense, but I feel most of all the team. He recognizes that just like his teams, his title teams, they aren't going to overpower anyone, but overwhelm with defensive acumen and offensive execution. They might lose eventually because of their collective lack of talent, but don't believe these Chicago Bulls will go down easy. They're a team in the truest sense of the word, and you'll have to take them down as a team.