Chris Bosh of the Miami Heat had to sacrifice a lot to join LeBron James and Dwyane Wade, plus endure constant ridicule of his basketball stature. He might just be earning himself redemption with his important play against the Boston Celtics, particularly in Game 4 to put them in a decisive 3-1 hole.

Game 4 was hanging in the balance in the Garden. The wounded and battered Boston Celtics were mustering one last cry, one last gasp to stay alive in the race for one last championship. But the Miami Heat were finally burying the hatchet in overtime. Dwyane Wade nailed some incredible shots, LeBron James added a few more plays, and it looked Miami was finally ready to move on.

But one last gasp run by Boston left Miami only up three with half a minute remaining left. And here James went again, dribbling, dribbling, dribbling at the top of the key.  Kevin Garnett switched off to him and backed off, ready to concede the jumper. Because everyone knew what LeBron would do if he couldn't find his driving lane. Pull up, fadeaway, and hope for the best.

LeBron dribbled the shot clock down to three, sized up Garnett, leaned forward, then backed away into his patented long distance jumper to try and seal the deal. It predictably clanged.

Then one arm came stretching out, tapped the ball back into the basket, and sent Celtics Nation to the exits. 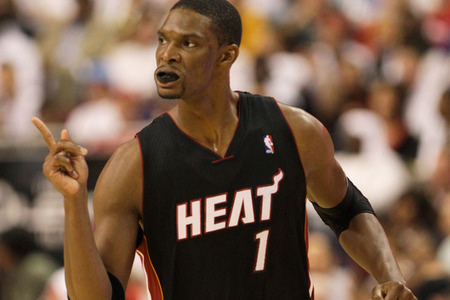 After all the fallout concerning the Decision, after all the posturing and preening, it wasn't LeBron who was bearing the brunt of the pain. Yeah, he was villified and booed whenever he left the vicinity of Miami, but no one denied his stature as a basketball player. He still put up 35 points on the road in what will likely be the decisive game of the most important playoff series of his career. No one ever questioned his talent and ability, and no one ever will.

No, the favorite whipping boy has been the third member of the highlighted trio, the introspective Texan who arrived via Toronto.

James and Wade might have had to give up a little of their individual numbers to satisfy their goals as a unit, but for the most part they aren't performing much different than the unit. Chris Bosh has had to sacrifice a lot. No longer would Bosh be the number one option calling for the ball, the guy who would be able to take it in the post on most possessions, isolate and create. Definitely not with these two basketball dynamos on this team, two guys who would have to take the ball and make things happen.

No, Bosh was going to have to do less while doing more. He'd have to sacrifice his stats, his individual numbers, and most of the glorious moments a premier NBA talent usually gathers. And then he'd have to bear the brunt for the Heat's inconsistencies as a consequence of that sacrifice.

When the Heat struggle, Bosh is an easy target on this team. His numbers vacillate from game-to-game, therefore it must be Bosh that's the problem. Pretty simple case, open and shut.

One of the shocking things is how quickly the Internet, even NBA Internet writers (a pretty knowledgeable bunch), have been so quick to turn on Bosh. It's as if none of them realize the type of things Bosh had to do in Toronto are TOTALLY different from the things he had to do in Miami. Take a look at these numbers.

Bosh in Toronto was much like LeBron in Cleveland. Bosh had to carry a much bigger load on an inferior team, only unlike LeBron he didn't have the talents to carry the Raptors any further than the first round. So he moved on to a situation where he could produce tangible results ... only to find himself surrounded with TOO much talent.

It was inevitable he'd struggle to perform consistently with two guys who demand the ball in their hands to create individually. He was all of a sudden the poor man's Horace Grant, a man who was being displaced by Joel Anthony in terms of relative importance. He was dependent too often on the rhythm and the flow of the game to receive the ball and do things with it.

If you don't think that's sacrifice in basketball, I don't know what is. 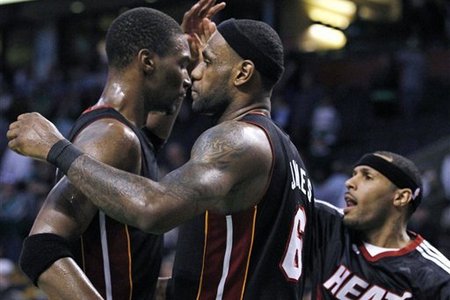 Bosh's sacrifice did tell us one thing about him. The man perseveres. Even after a virtual no-show in Game 3, even after a dreadful offensive first half where he shot 2 for 8 and might seriously have been a liability on the floor, Bosh's contributions and bailouts of James and Wade helped finish off the Celtics for good. Thanks to MySynergySports, we can see how effective Bosh was in finishing plays instead of having to work on his own.

The Miami Heat don't need Bosh to bust out and start posting up like a madman down low. They need him to clean up the mess, and that's exactly what he did perfectly on Monday night. Wade and LeBron might have been the stars, but they wouldn't be up 3-1 without Bosh's contributions.

Another performance like that against Boston, and a few more down the road, and Bosh will be that much closer to proving the sacrifices were all worth it.