On Saturday, April 30th, five fighters with either Bay Area or California ties will be in action for UFC 129 at the Rogers Centre in Toronto, Ontario, Canada. Every one of them were born in America, and they'll be taking on Canadian opponents. The entire preliminary card is Canada versus America, while the main card also features two bouts of that ilk as well. In the main event, the Bay Area/Orange County based Jake Shields will be taking on Georges St-Pierre in a five-round affair for the promotion's welterweight championship.

It's simply worth noting that the UFC is once again going with the nationalistic approach, having done so a few times in the past, and that Shields will be "representing" the USA when he takes on the French-Canadian mega-star. But as I've done in the past, I'm going to make the Bay Area connection here and suggest that Shields is also representing Bay Area mixed martial arts as a whole. Personally, this makes me a bit distraught because I'm not a fan of Shields at all, but I'll take what I can get.

Worth noting that the Bay Area already has a champion in the UFC, as Cain Velasquez, (San Jose, CA) holds the promotion's heavyweight championship. Other fighters appearing on the card with Bay Area or California ties are Nate Diaz out of Stockton, Jake Ellenberger out of Orange County, Daniel Roberts out of San Francisco, and Charlie Valencia out of Los Angeles.

The newest UFC 129 fight poster is after the jump. 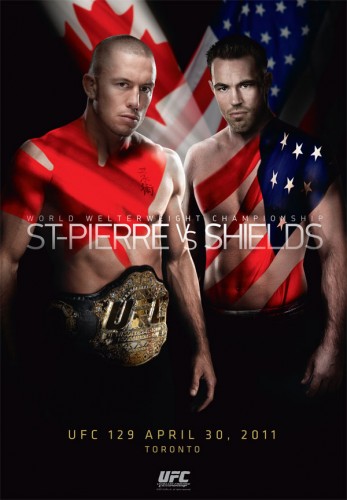 You can buy this poster at the UFC Store.