Strikeforce is up to big things in the sport of mixed martial arts with their ongoing heavyweight grand prix. The San Jose-based promotion is two fights into their eight-man tournament which could potentially decide who the number one heavyweight fighter in the sport is, let alone just the number two promotion itself. The UFC currently rosters the consensus number one heavyweight in Mexican-American Cain Velasquez, but things could change with his limited resume and the overall strength of Strikeforce's heavyweight division, perhaps the only one that can compete at the top level with that of the UFC's.

The tournament draw, if you happened to miss it, is at the bottom of this article. Last week's Strikeforce: Fedor vs. Silva event got things kicked off with two tournament bouts and three potential reserve bouts on an all-heavyweight main card. We'll give you a quick run down of the card to catch you up on the action before we begin looking ahead to the other half of the bracket and much more.

Former UFC heavyweight champion Andrei Arlovski took on K-1 veteran Sergei Kharitonov in co-main event action and succumed to strikes at 2:49 of the very first round. It was Arlovski's fourth-straight loss, three of which have been by some form of brutal knockout. Despite this fact, Arlovski was the second-favorite to win the entire tournament behind only Fedor himself, which is probably just for the simple fact that people remember him from his UFC days.

Shane del Rosario took on and submitted Lavar "Big" Johnson in a match that is supposed to decide the first alternate for the tournament. Del Rosario was the favorite going into the fight, and is considered one of Strikeforce's more promising up-and-coming fighters. In a recent interview on MMA Junkie Radio at MMAJunkie.com, Del Rosario expressed his desire to have more big fight opportunities sooner rather than later, so he may not be considered as a true alternate unless there is an injury very soon.

The card opened up with what was considered the bout to decide the second alternate as Valentijn Overeem took on K-1 convert Ray Sefo. Sefo began the fight swinging wide, looping hooks and looked good doing so, but Overeem secured a takedown and submitted the very-overmatched-on-the-ground Sefo in due course with a neck crank. The bout was followed by what could be considered a match for the third alternate spot, where Chad Griggs defeated yet another fighter he wasn't supposed to when he absolutely wrecked light heavyweight prospect Gian Villante, stopping him at 2:49 of round one. Griggs previously dispatched of Bobby Lashley in a fight many believe was made to build Lashley into an up-and-comer within the division.

Despite all this talk of alternates and replacements, the actual first guy to get an opportunity to step in is likely someone who was not in any of those fights already mentioned. That guy is Fedor Emelianenko, former consensus number one pound-for-pound fighter in the world and definite legend of the sport. Fedor took on Antonio "Bigfoot" Silva in the main event of Saturday's show, and suffered his second-straight loss and perhaps only his second legitimate loss of his entire career.

Fedor came in weighing somewhere in the vicinity of 230 pounds, while "Bigfoot" weighed in at 265 when the fighters took the scales for the weigh-ins, but reportedly weighed as much as 280 when he entered the cage to take on the Russian Sambo specialist. That's a fifty pound difference while talking about some of the best fighters in the sport today. It was brutal.

The first round was competitive, with neither fighter clearly taking it, though the consensus seemed to be Fedor in a 10-9 affair by a nudge. Fedor was hit by a few good counters, but most wrote it off as the usual damage that "The Last Emperor" takes in all of his fights before he storms ahead to dominate his foe. But then the second round happened, and there wasn't to be a third after. Once the round began, Silva had an immediate takedown and held it throughout the round's duration. There was no way Fedor was going to be getting out from under this man with the 50 pound advantage - something that's hard on its own right - let alone this man with a fifty pound advantage and stellar Brazilian Jiu-Jitsu credentials like Silva possesses.

Fedor took a beating like we've never seen before. Silva went at him as though Fedor were the man begging for a head start he would never get in the classic rock song "Gimmie Three Steps." Remarkably, Fedor lasted five minutes and even finished the round going for a submission attempt. Immediately after the fighters headed to their corners for the one-minute break though, the referee called a stop to the match, declaring Antonio Silva the winner by doctor stoppage.

Unlike the man in the aforementioned song, however - it doesn't look like we'll "Never see him no more," despite post-fight declarations of possible retirement. Immediately following the fight, Fedor was asked about his future in the sport by the ever-desensitizing Gus Johnson, and Fedor, through a translator, expressed that he has a had a long and wonderful career, and that it is time to end it. His translator added the word "perhaps," in there, though when Fedor said it, he was more than definitive.

That didn't stop his management from saying that they felt he would fight and Strikeforce CEO Scott Coker from saying that Fedor has fights on his contract, and could be an alternate in the tournament going forward. This has gotten mixed reviews from fans and critics alike, the general consensus seems to be to let the man who previously owned a 25+ fight win streak, retire on his own terms.

Whether it be his terms, or too much pushing from his management, Fedor has recently gone back on his post-fight statements. He said that he has a few more fights left in him and that he rushed his decision following his loss to Silva. He goes on to state that he could fight again in the tournament, and that he just needed to get back in there.

You can follow this stream for all updates about Strikeforce's 2011 Heavyweight Grand Prix throughout its duration. Look for bouts to continue on April 9th when (new favorite) Alistair Overeem takes on Brazilian Jiu-Jitsu ace Fabricio Werdum and Josh Barnett faces Brett "The Grim" Rogers. You can expect plenty of news and analysis in the meantime, however. 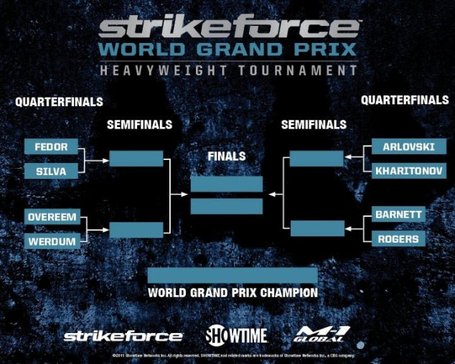 ***
Strikeforce is a mixed martial arts promotion based in San Jose, CA. The promotion is headed by CEO Scott Coker and is owned by Silicon Valley Sports and Entertainment, operators of the HP Pavilion arena and the San Jose Sharks.