San Francisco 49ers wide receiver Michael Crabtree was fined $10,000 by the NFL this week for, and I'm paraphrasing, 'getting his swag on'. In more legal, official terms, I guess it's also knowns as 'a uniform violation.' This violation, of course, was for Crabtree's choice of golden shoes, worn in Monday Night's primetime game against the visiting Pittsburgh Steelers. Crabtree had four catches for 38 yards in the game as the Niners went on to beat the Steelers 20-3.

The NFL has it's rules in place so uniforms are actually 'uniform' and I can understand that, but you really can't fault a guy for wearing gold shoes on such a highly-anticipated and widely watched game.

Check out below to see Crabtree's $10,000 shoes, courtesy of Taylor Price (@taylorprice49). 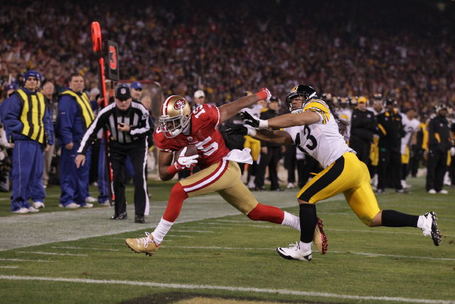 In a related story, though maybe not as audacious, 49ers safety Donte Whitner was fined $5,000 for wearing long black socks, a break in the 49ers red and white leg ensemble.