Looking at the 10 receivers currently on the Raiders roster and their chances of making the team.

The Oakland Raiders currently have 10 wide receivers on there active roster and although that is not uncommon to see at this point in the season the difference for the Raiders are that none of these guys are just camp bodies. Every receiver on this roster has a legitimate claim to a roster spot and few can say that they have a spot locked up.  The list of receivers on the Raiders website shows that even the Raiders most veteran receivers have only 3 years of experience so any one of them could end up having a breakout season whether it's for the Raiders or a contending team.

Now to start looking at who is going to end up with a roster spot and who is going to end up on the waiver wire it has to be understood that there are already a few spots that are locked up, as well as a few guys with little to no chance of a contract. Louis Murphy was the top pass catcher on the roster last season and looks to have one of the starting spots under lock after an impressive rookie season. Of course going into last season the Raiders had Chaz Schilens tagged as there top receiver but after an injury plagued season and training camp he is no longer the favorite for a break out season. Although I'd still consider him a lock to make the roster he plays the same spot as Murphy and will most likely find himself on the sideline trying to earn playing time and re-establish himself when the season starts. 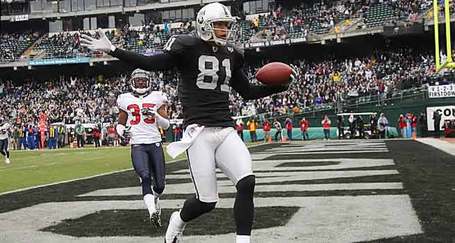 This season it's likely that the Raiders will carry six receivers on the roster with one of them serving as a return man as well so at least one spot will go to a capable returner. Although recently Johnnie Lee has done the job and helped out by catching some passes as well, this season he will be challenged for his spot by Nick Miller, Yamon Figurs and rookie Jacoby Ford. Yamon is probably the most proven return man on the roster  but he must show the coaching staff that  he can also contribute to the passing game. He has the speed that the Raiders love to see but his hands have always been a bit of a question whether he is catching passes or punts. Both Nick Miller and Jacoby Ford would be suitable options at return men but I don't believe that either of them has the ability of Figurs or even Higgins. Ford however has looked excellent when running routes and could make an immediate impact in the passing game.

Heyward- Bey seems to have the inside track to the starting spot opposite Louis Murphy. His hands seem to be improved even if they are still in question and his status as a top 10 draft pick makes him hard to sit. Although his athletic ability has never been questioned he has the speed to make defenses sweat if he can catch the ball once he is open. Jacoby Ford also looks to be a lock to the roster as he has looked good in practice and is a fourth round draft pick so it would be tough to cut him. In the end I see four guys with an inside track at roster spots and both Higgins and Figurs rounding out the position although there are clearly no guarantees. Both Nick Miller and Todd Watkins could be good number five or six receivers to round out the squad but they should be able to find work elsewhere if they are not wanted in Oakland. It will be interesting to see what decisions the team makes and whether they are the right ones in the long run. 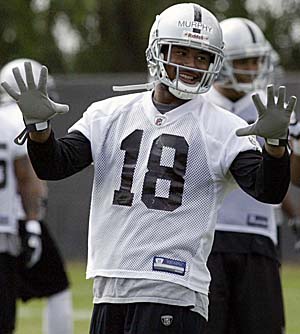 On The Cusp/ Practice Squad