For the past decade, the Golden Bears have been blessed with great linebackers, with the two best being current pros Desmond Bishop (Green Bay) and Zack Follett (Detroit). Here's what I wrote about Follett and Bishop in my greatest linebackers post.

Bishop ended up stealing the spotlight from the much-maligned quarterback. In over three-fourths of his games as a Golden Bear, he finished with seven tackles or more. His 2006 season was probably the greatest by a linebacker this decade--126 tackles, almost 10 tackles per game, and averaged 11.2 tackles per game down the stretch. He made Rivals as a third-team All-American. His 2005 campaign wasn't too shabby either--89 tackles, 62 solos, led the team in tackles in seven games.

In the end, the pass rushing ability of Follett puts him at the top of this list, but only narrowly so. He is definitely the defensive fan favorite of this past decade, thanks to his fearless, reckless ability to rush the passer. He had a banner 2008 campaign as the vocal leader of the Cal defense, notching an impressive 10.5 sacks, 23.5 tackles for loss, 5 forced fumbles, 6 games with 7 tackles or more. No one was freed up more by the 3-4 than Follett, who would often find himself roaming in offensive backfields while his mates took care of the rest.

While the debate has raged on at CGB, two voices have thrown themselves into the ring. Probably the two most important voices of all.

Bishop, seeing he was losing by nearly a two to one margin to Follett, quickly retweeted to his followers to vote for him. The campaign seems to be working, as the margin has now been cut to a mere 30 votes.

More importantly, he made his case for the voters, and it is a very compelling one. 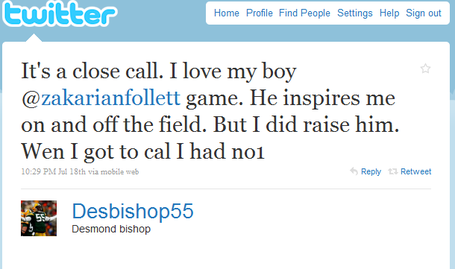 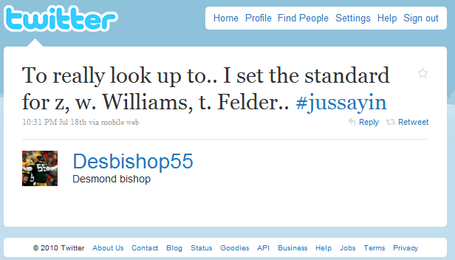 Follett seemed to agree, but had this parry: 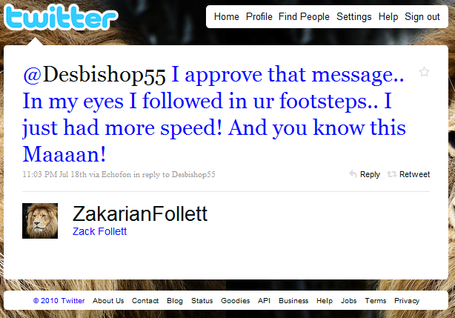 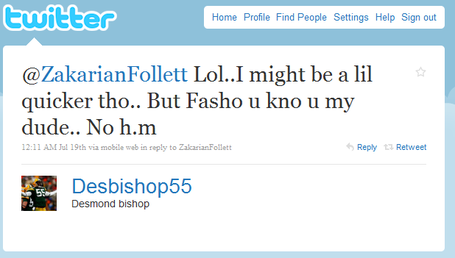 But Bishop, as always, has the logical solution. 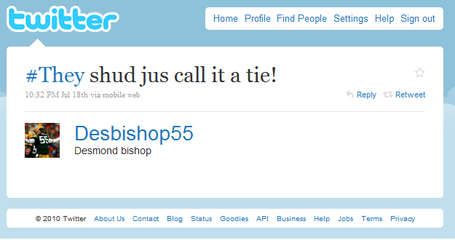 Cal fans, whose side are you on, the Bishop or the Pain Train?