Eri Yoshida’s baseball cap, black with a red C and a bandit in a batting stance, is the same as her Chico Outlaws teammates’ hats.

Her uniform is also similar, black with the numeral 3 in red on the back, and her pants, white with a red stripe down the sides.

Yoshida shares a dream with her contemporaries on the Outlaws, an independent Golden Baseball League team — playing in the Major Leagues, represented by a Boston Red Sox titanium necklace hanging around her neck.

Close your eyes and listen to those around her, and she sounds like any raw 18-year-old starting pitcher, not the submarine knuckleballer from Yokohama, Japan, and the first woman to play pro baseball in the United States since Ila Borders signed with the St. Paul Saints in 1997 (and finished in 2000).

"We see her as one of us," fellow submarine Outlaws pitcher Justin Segal said. "We don’t look at her as anything other than a baseball player."

Yoshida was always around baseball as a child, and wanted to play baseball, like her brother did.

Last year, Yoshida pitched for the Kobe 9 Cruise of the Japanese Independent League, going 0-2 with a 4.03 earned run average over 10 2/3 innings, also striking out three. She came to the States to play for the Yuma Scorpions of the Arizona Winter League, earning a 1-1 record and posting an ERA of 4.79.

Drafted from the Arizona Winter League by Chico with its first pick, the college town about 90 miles north of Sacramento has taken a shine to Yoshida. So far this season, she is 0-1 with a 6.60 ERA in 15 innings. Yoshida is also 1-for-4 at the plate with an RBI.

As fans waited for her second Chico start, June 12 against the Yuma Scorpions (a separate entity from the Arizona Winter League team), they lined up under a tree near right field for Outlaws players to sign a team photo. Fans also received an autographed portrait of Yoshida.

A few of them wore jersey-style T-shirts with Yoshida’s name and number on the back. One young girl, sitting on a picnic table with her back to the bullpen mound, was dressed in a red kimono with white flowers.

"It’s incredible," said Kathi Olson, treasurer of the Outlaws booster club, who was wearing a Yoshida T-shirt. "Everybody’s just really gotten behind her."

Before Yoshida started her pre-game warmups against the Scorpions, 5-foot-11 shortstop Alex Prieto put his hands together and bowed before the 5-foot-1 pitcher. She bowed back and headed toward the bullpen, where she was a couple feet away from quite a few cameras and fans.

Japanese reporters, also watching her warmup pitches, said they usually follow the likes of Hideki Matsui or Ichiro Suzuki for their publications, but come to Chico when the "Knuckle Princess" pitches.

Chico’s manager Garry Templeton, a former Major League All-Star shortstop, and pitching coach Wayne Franklin said they treat her no different than any other pitcher, praising her maturity and work ethic.

"She’s been around us enough now that she knows what we’re trying to communicate to her," Templeton said. "She understands the baseball language. You’ve got 23 guys here, and everyone’s trying to help her out."

Franklin said he’s been amazed at how well Yoshida has transitioned to life in America and said that he’s not sure if an 18-year-old in the States would be able to do as well personally in Japan.

Like many young hurlers, Yoshida also has a pitch count, one that prevented her from getting her first American win against the Scorpions in front of a near sellout crowd at Nettleton Stadium.

That night, Yoshida surrendered two runs through four innings of work and left with a 5-2 lead, which her teammates held in an 8-4 victory. Had she pitched one more inning, she would’ve been eligible for a win.

Templeton said Yoshida had a pitch limit of 80 and that she was feeling a little sore, so he pulled her, playing on the cautious side.

"I wanted to throw one more inning, but the manager has the ideas, he has the strategy, so I respect that," Yoshida said through her sister, serving as her translator. "I just want to improve more and more. I prepared to pitch like usual, so I could relax more than last time."

She also recorded her first strikeout for the Outlaws that night, a swinging third strike on the outside part of the plate by Yuma outfielder Timothy Rodriguez. The whiff brought about laughs from the crowd, who also jeered second baseman Eric Scriven when he tried to bunt on Yoshida in the third inning.

Robby Alcombrack, Yoshida’s personal catcher — a necessary habit among knuckleball pitchers — said the two have bonded and that he’s seen progression in her performance since spring training.

Alcombrack said in addition to the knuckleball, a slow, fluttering pitch that wouldn’t get pulled over on most U.S. highways, Yoshida mixes in a fastball in the low 60s as well as a slider and curveball.

"Every time she gets up there, she gets better," said Alcombrack, who noted he’s never caught a knuckleballer before this season. "She works harder than any player here. She fits in perfectly."

But after Yoshida is done being just one of the guys, she’s more than happy to be one of the girls.

Surrounded by a horde of Japanese and American media following the game, Yoshida’s sister relays the pitcher’s answers in English. When the reporters are finished asking questions and kids are finished asking for autographs, Yoshida stands near first base and jokes around with her sister.

Though Yoshida speaks only a bit of English, her grasp of the language is getting better, her sister said, through speaking it at home and watching TV shows such as, "The Bachelor."

Close your eyes and listen to those around her, and she sounds like any 18-year-old girl following her dream.

"It’s time for a woman to be in baseball," Olson said. "She doesn’t speak a lot (of English), but I think she understands that we appreciate her." 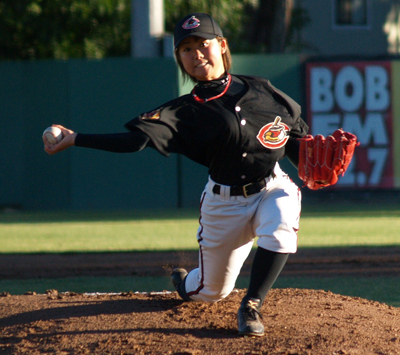 Justin Lafferty is a freelance journalist who has written for the Tracy Press, Patch.com, Rivals.com, the San Diego Union-Tribune and Bay Area News Group.