As a Cal fan, I find Jim Harbaugh a curious oddity.  At times I worry that he's the next big thing and could supplant Cal as the dominant Bay Area college sports team. At other times I feel like he's just an overrated prop for media types to discuss that yes, academic schools can compete on the big stage.

However, his Twitter page is surprisingly mesmerizing, because most of his Tweets seemed to come from a man who had taken one too many bong hits. Andy Staples has noticed the exact same things (HT Hydrotech from California Golden Blogs), and has come to a different conclusion, one that should greatly amuse all Golden Bears while alarming the Cardinal folk. Is Harbaugh violating recruiting regulations with his inane comments?

Take a look at some of the more cryptic messages after the jump.

Hmm...well, what exactly is Harbaugh doing here? You be the judge. 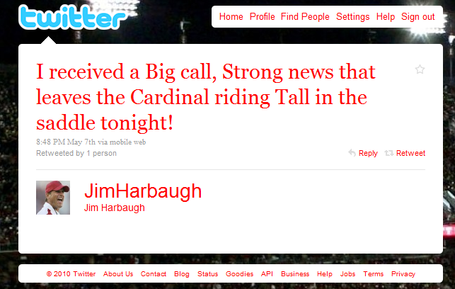 The first two unusually capitalized letters tell us the commitment came from a Big, Strong player -- and possibly that Harbaugh read a lot of Hunter S. Thompson in his formative years. So we should assume the Cardinal received a commitment from a lineman on May 7. The third (Tall) and a check of Rivals reveals the mystery man to be 6-foot-5 Parker, Colo., offensive tackle Brendon Austin, who at the time of his commitment was the tallest member of Stanford's 2011 recruiting class.

My interpretation: Shane Vereen is pretty diminutive, Coach. Might want to think of going small. 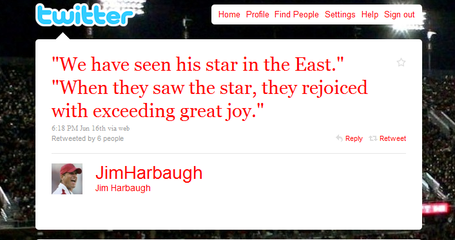 At first glance, I thought this one might not be about recruiting. Maybe Harbaugh pulled from the Book of Matthew because he wanted a six-month head start on memorizing lines so he could audition to play one of the Magi in his local church's live nativity. But then I read this post from the indefatigable Spencer Hall of EveryDayShouldBeSaturday.com. Indeed, Harbaugh's tweet referred to the commitment of Tucker, Ga., linebacker James Vaughters, a 6-2, 233-pound tackling machine whose home is most assuredly east of Palo Alto. An Atlanta Journal-Constitution interview with Vaughters the next day erased any shred of doubt. "Vaughters ... said he actually has had his mind made up a while," the AJC's Chip Towers wrote. "He said he called Coach Harbaugh to inform him about 9 o'clock Wednesday night..

My interpretation: Cal is actually to the west of the Furd. Yeah, surprising, I know, but look at the map!

And finally, perhaps the most bizarre Tweet of all... 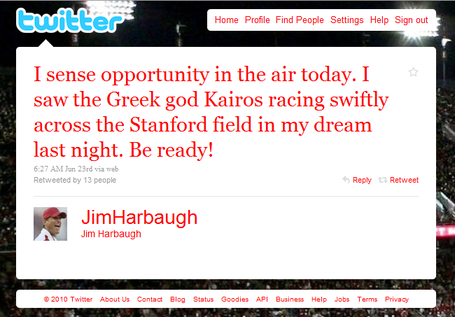 Rivals.com told me the commitment came a night earlier from 6-4, 220-pound Flushing, N.Y., receiver Devon Cajuste, who pledged to play for the Cardinal after a standout performance at Stanford's camp. This handy list of Greek deities told me that Kairos was the god of opportunity, or, more specifically, of the opportune moment. It also told me the god's name can be spelled Caerus. That version looks a little more like the mystery recruit's name. But Harbaugh hadn't dreamt it; Cajuste had made the most of his opportunity at the camp.

My interpretation: Thank goodness Staples cleared that up. Because really coach, Mike Mohamed is half Pakistani, not Greek.