As you're reading this, I hope you have all torn through your packaged goodies and uncovered something that you wanted, perhaps some special deluxe holiday sneakers by the studs playing today in Kobe Bryant, Kevin Durant, and Monta Ellis.

The Portland Trailblazers take on the Golden State Warriors tonight to close out an epic Christmas Day line-up of games, which oddly ends with these two underwhelming Pacific Divisions teams. 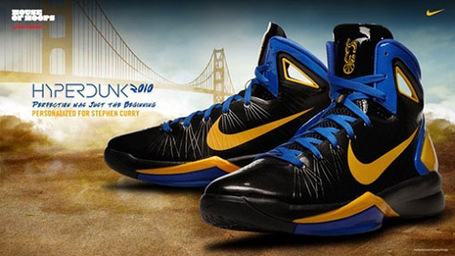 The Warriors are handing out all the gifts that their fans have been wanting since the first game of the season: a full roster, possibly. Both Andris Biedrins and Dan Gadzuric may come back tonight. Brandan Wright, however, is, reportedly, a more likely return to the line-up (via San Jose Mercury).

Both Marcus Camby and Joel Pryzbilla have been out the last two games with injuries and star Brandon Roy is still one week away from returning.

After witnessing the Trailblazers second teamers-cum-starters destroy the Warriors in their last meeting, you can bet the Warriors got the scouting report on second year (and second-round pick) F Dante Cunningham. Hopefully they read Dime Magazine's Q/A with him last week after Cunningham shot 5-7 from the field for 13 points in a career high 39 minutes. The Q/A is very instructional for the Warriors, especially next time they face-off at the Rose Garden:

Dime: Where are your favorite places to hang out in Portland?
DC: My house. When I'm home, I'm right in my house all day. But I love to eat so Benihana's, Portland City Grill, both these are definitely good places to go.