The Sports Show You Should Be Watching: CSN's The Sunday Night Rap

We take a look at The Sunday Night Rap, a new television program on CSN California that provides a unique weekly look at the Bay Area sports scene.

Share All sharing options for: The Sports Show You Should Be Watching: CSN's The Sunday Night Rap

Over the past six or seven months, the folks at Comcast Sports Net have put a lot of work into developing the programming available on television and at their website. At the website, CSN has brought in Matt Maiocco to cover the 49ers, Mychael Urban to cover the Oakland A's, and Matt Steinmentz to cover the Golden State Warriors. More recently, CSN added famed San Francisco Chronicle columnist Ray Ratto as their Senior Insider.

On television, things had been relatively quiet until recently. A few weeks ago, CSN debuted The Sunday Night Rap. If you're a Bay Area sports fan and haven't seen the program yet, I highly recommend taking an hour out of your Sunday evening to check it out. The show airs at 9pm pacific on CSN California, with a re-broadcast at midnight pacific.

Bay Area sports fans, and really west coast sports fans in general, often complain about the lack of quality programming related to West Coast sports. ESPN often gets dubbed the East Coast Sports Network because of their often heavy focus on everything east of the Mississippi River. Moreover, there's the proverbial East Coast Sports Bias that gets thrown around anytime a quality West Coast story is ignored. ESPN launched ESPN LA this past year to provide more West Coast coverage, but rolling out Sportscenter from LA every so often doesn't quite cut it.

Local channels provide their own weekly rap shows but they often come across as a bit too sterile for their own good. Throw in the fact that the Internet allows most people to know what's happened well in advance of the show, and what's the point of watching. I'm thinking that this is where The Sunday Night Rap will come into play.

The Sunday Night Rap should provide the ideal wrap on the week for Bay Area sports fans. The show features sports radio icons Gary Radnich and Tony Bruno debating and needling each other on the various key Bay Area sports stories of the week. Radnich and Bruno have worked together for fifteen years primarily with Bruno appearing on Radnich's KNBR show. The Sunday Night Rap takes the chemistry they've developed over the years and puts it on television. It goes beyond a normal weekly wrap show by combining general delivery of the news with the irreverent nature that Bruno and Radnich have developed over the years. 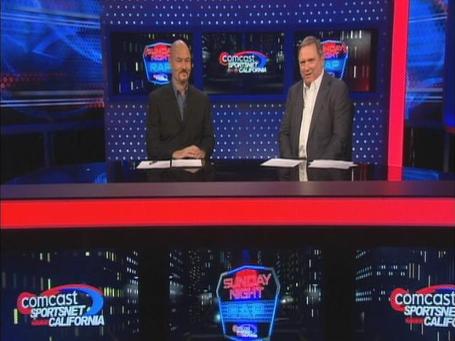 Last week I had a chance to check out the show live from CSN's studios, and also speak with the two hosts and some of the production crew. I found it particularly interesting speaking with Gary Radnich after the show because of the similarity between his comments regarding CSN and those of Ray Ratto in a previous interview here at SB Nation Bay Area. I asked both of them for the reasons behind their respective choices to come to CSN and they both were incredibly enthusiastic about what CSN was doing and where they were going. It's interesting to see that kind of enthusiasm from two guys who are both well established in their respective mediums.

As for the show itself? It has a lot of built-in strengths and it also has some areas where time will likely improve the product. Radnich and Bruno have a chemistry that has developed over years of working together on the radio and that shows through when they debate the topics of the week. This is arguably the biggest strength of the show. The relationship between these two personalities drives much of the show. They bring an irreverent but still informed take to sports. This angle provides a definitive alternative to most end of the week recap shows on the various networks.

The show has a third individual, Kara Tsuboi who acts as a cross between a host and a referee on the show. Tsuboi currently works as the in-game host at A's games over at the Oakland Coliseum. Her excitement shows through even as Radnich and Bruno rib her about her love of the A's. As Radnich and Bruno battle back and forth, Tsuboi often takes on the role of reeling them in from tangents that could easily end up well off the beaten path. She acts as a judge in one segment and also provides updates from the show's Twitter Feed and Facebook page.

Thus far there is a certain chemistry between the three personalities. However, I think it will improve as they get used to interacting with each other. It's only natural for there to be a better chemistry at this point between Radnich and Bruno. As they spend more time with Kara it will only help the show.

The show mixes in tweets and Facebook comments throughout the hour. As social networking has exploded in recent years, it's only natural for television to work them into programming. It's a little bumpy at this point because there isn't a natural flow but it certainly provides useful interaction between the show and its viewers. Again, it's something that takes time to develop.

While there are certainly areas in which show can and likely will improve, it provides a unique take on the weekly wrap show. Given that Sunday night's provide next to no quality programming, people are always looking for something decent to watch. Considering Sunday Night Football is usually done by 9pm, it's perfect timing for Bay Area Sports fans. Make sure and check it out this Sunday at 9pm on channel 41 (re-aired at midnight).

For more details on The Sunday Night Rap, check out the official CSN site, the Twitter feed, and the Facebook page.