For those not familiar with the College Gameday format (and really, what nuclear bunker have you been living in the past decade?), the ESPN college crew heads to one of the most attractive contests of the night and the diehard college fans construct their best gameday signs. Even though it was 6 AM at Eugene when the telecast kicked off, Oregon fans were not the least bit groggy (the Oregon Duck was in pajamas, but he was raring to go).

Oh, there were some worthy candidates.

"Masoli, how are you? We’re doing fine. Thanks"

But a clear winner emerged early.

This sign looks almost like an afterthought (probably took a minute to make), but it is devastatingly effective. 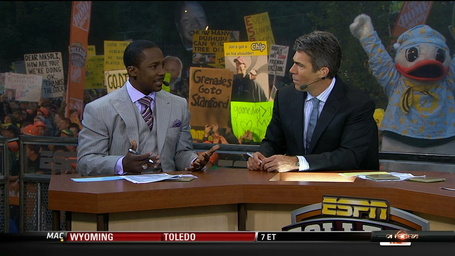 via 30fps.mocksession.com (HT bubbaprog for the screencap)

"Grenades Go To Stanford"? You might be going, huh? Don't worry, you're a patriot. It means you don't watch Jersey Shore.

The solitary ugly girl always found with a group of hotties. If the grenade doesn't get any action, then neither does anyone else.

You win this round Oregon fan.